I’m reading a fun children’s series called Spirit Animals. It’s about children summoning these amazing animals as companions, and the adventures they share together. As far as fun and entertaining reading goes, it’s a good series. But it definitely got me thinking. What is my Spirit Animal?

This is a much more difficult question to answer than most realize. I’ve worked with AMAZING animals in my career as a zookeeper, and each have qualities which I would like to encompass into my persona. Belugas- all I need to know about life I learned from Spooky. Elephants- well, if you need a reminder of the best lesson I’ve learned from elephants, read about my relationship with Watoto. Sea otters- be playful, be charming, and love the water. Any one of those animals could be significant spirit animals. 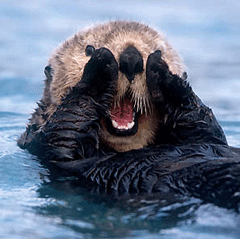 There are the animals which are becoming more significant to me as I broaden ZooFit’s reaches, too. Hummingbirds are certainly a special animal. As I teach others to do what they can for themselves and the planet, this is certainly a spirit animal for ZooFit, if not me personally. Also, I don’t know why I’m so drawn to goats, but GOATS!!! I love goats. 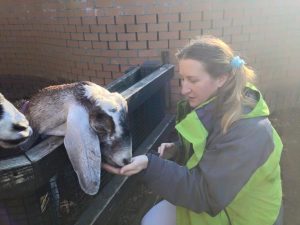 And then there are the sloths. I am not obsessed with sloths. They haven’t put a restraining order on me…yet. But there is something there. I will move mountains for the opportunity to get close to a sloth. I love them. 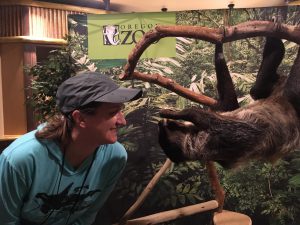 But why? Why sloths? Well, the true beginning of my “enthusiastic passion” started in 2014 when a friend of mine at the gym and I watched an adorable video of a sloth and started mimicking the sounds when we were near exhaustion during a workout. And then the cuteness grew from there.

In 2016 I moved to Whidbey Island and wanted to inspire others to move, at their own pace. So, I suggested a few programs with Parks and Recs, but I didn’t get any real interest until I created the Sloth Army. Yeah, it’s exactly what it sounds like. We “run”. That became our motto. Whenever someone asked if they could join us, I’d warn them “we are really slow”.

The best part about the Sloth Army was not just our pace. It was our adventurous spirit. We didn’t run the same trail week after week. No, no. We explored Whidbey Island, and tried different things. Once, we “ran” Ebey’s Landing, which is a long 3-mile loop on a trail up a hill, then down to a beach. We did that once. Just once.

We also tried a beach run at Double Bluff. Running on beaches is not my forte. Well, running isn’t exactly my forte, but running on beaches is DEFINITELY not my forte. Our favorite trails were the wooded runs- Putney Woods, Whidbey Institute, Trustland Trail, Whidbey Community Park, and the Greenbank Farm where participants could bring their dogs and let them run free with us.

And thus, sloths became a huge part of my life. But I strived to connect our group with conservation however I could. Helping others appreciate sloths through the Sloth Army brought awareness to their plight, and wanting to protect them. A good friend even donated $100 to the Rainforest Alliance in the name of the Sloth Army. 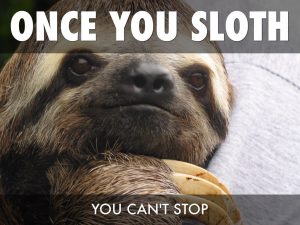 So, the whole point of my long drawn out tangent is October 20th is International Sloth Day (thanks Peppermint Narwhal). And anytime I have a reason to celebrate sloths, I will take it.

Today, ZooFit is encouraging everyone to join the Sloth Army. Go for a “run”. You don’t have to go fast. You don’t even really have to run. Or even jog. But explore your community. Go on a sloth adventure.

Ideas for where to go on your Sloth Army Trail Run:

State parks- trails abound in state parks. You need a Discover Pass to visit. In Washington, it only costs $30 for a whole year of access to trails all over the entire state. Check out your local state park, support it, love it.

County parks- usually free for day use, many of these parks have a trail or track to sloth around.

All Trails- this easy to use app will find trails or hikes in your area. Type in your city and let All Trails help you find your next big adventure.

Nature parks- some places don’t want you to run, so this might be THE PERFECT place to experience nature and get your sloth on. National Wildlife Refuges are a great place to Sloth Army around. Running is frowned upon, but you can get incredible views of nature. 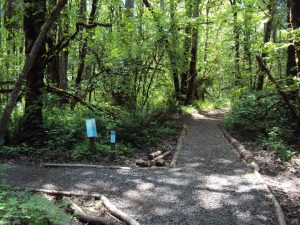 Zoos and aquariums- Omg, “run” around the zoo and VISIT sloths. The Sloth Army’s dream run. I’m also pretty partial to manatees. They are pretty slow. See if you can find the “slowest” animal at your local zoo or aquarium, and let them be your mascot. 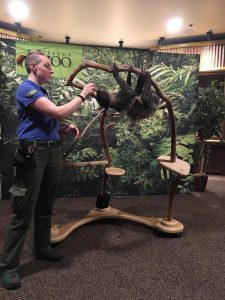 It doesn’t matter where you go “running”. Your neighborhood, a local trail, a long hike, or a favorite park. But grab a friend and build your Army. Just keep going, one step at a time. 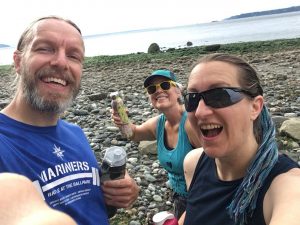