When I was getting my group fitness certification, we studied the many components of fitness (Agility, balance, coordination, endurance, flexibility, strength , power, speed, etc). Not that ANY of the components are my strong point, but one of my weakest areas is that of agility.

Agility is the ability to move and change direction and position of the body quickly and effectively while under control. It requires quick reflexes, coordination, balance, speed, and correct response to the changing situation, none of which I possess. So, it’s important that I practice some of those skills.

Now, agility ladders aren’t the most expensive workout equipment on the market. But I have found a way to make my own version of an agility ladder, which works great. It’s super portable (even smaller than those you buy in the stores), and it’s basically free. I use items I have around the house to create my own agility training tool.

Using just some shoe strings and plastic lids (which cannot be recycled where I live), I created a version of an agility ladder that I can take wherever I go. If I am at a park and want to bust out a quick cardio workout, exercising with an agility ladder is the way to go. 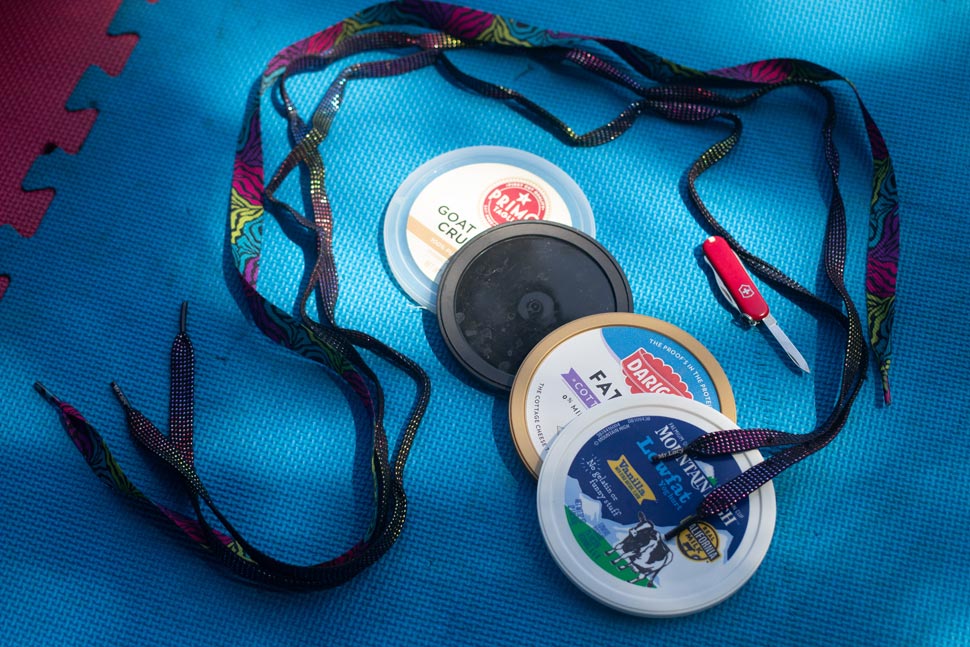 Agility training doesn’t have to be a whole workout in and of itself. You can use some of the exercises for a warm-up, or section some of your conditioning segment with some agility exercises. But if you want to focus on speed, coordination, and agility for your workout, this might be a fun one to try.

Set up one or two agility ladders. You will also need a minute timer set that will go off every minute on the minute for 21 minutes. You can start wherever you like on the list, but go through each exercise for a full minute each. As soon as the timer beeps and starts the next minute, move as quickly as possible to the next exercise.

Once you have completed all the exercises once, rest for one minute, then start again from your beginning set. Try to go a little longer without rest at each station, or do a couple more repetitions the second time around, going a little faster, or performing the exercise a little more powerfully.

As always, do what you can and just do your best. You can always modify these exercises to slow it down and focus on coordination or balance, and then improve your speed and agility later as you repeat the workout or exercises in the future.

Let me know how it goes. Stay healthy and safe. And keep working on being the best version of yourself so we can make the world a little better together.