Consequences to our actions are effective in shaping behavior. It’s been proven time and again. So, if punishment is as effective as reinforcement, why does it matter which method we choose to shape our fitness? It matters because it changes our motivation drastically.

Punishment is an old and tired method of training animals. Most animal trainers/zookeepers use force-free methods, operant conditioning through positive reinforcement, and give the animals choice and control.

Punishment is effective in learning what not to do. Which is great when we have to stop something from happening immediately. If your child is reaching to place their finger in a socket, or walking up to a strange dog, there is nothing inherently wrong with teaching them to NOT do the dangerous activity.

But punishment doesn’t help create healthy habits. Yelling at a child to stop them from hurting themselves effectively stops the behavior. But they must also learn what is appropriate behavior in each scenario.

Look at it from an animal trainer’s point of view. You wouldn’t teach your dog to sit by punishing them for standing, or lying down, or jumping up, or walking. It would be an insanely long way around a simple task- teach them what you do want. 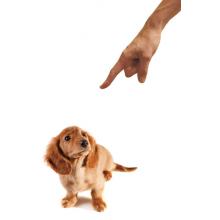 I experience frustration from time to time when someone asks me how they should train their pet to “stop clawing up the furniture” or “stop barking at every car that passes the window” or “stop digging up the garden”. Instead of focusing energy on what you don’t want, teach your pet what behavior is appropriate, using positive reinforcement. If you don’t want your cat to claw up your furniture, teach him where he CAN claw and sharpen his nails. To stop your dog from digging up your garden, teach them behaviors which eventually give them what they want while in the garden.

The same goes for our fitness. If we continuously focus on what we shouldn’t be doing, we are missing the opportunities to learn what we could be doing for our health and fitness.

Because punishment focuses on what not to do, the lesson learned from punishment is often skewed and misinterpreted. As a teenager, my parents often punished me, mostly for sneaking out at night. I was horrible about it. But whenever I got in trouble, I didn’t learn to stop sneaking out, I learned not to get CAUGHT sneaking out. 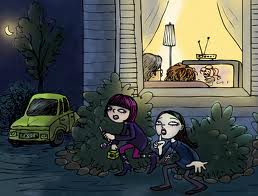 I am not saying my parents were wrong to punish me. Just keep in mind, it doesn’t always teach what we intended. If we incorporate penalties in our fitness, what lessons are we teaching ourselves? If we have a penalty for being late to our spin class or group fitness class, what do we learn from the situation? To not be late? Or to not show up when we are running late?

It never ceases to amaze me how fitness is totally inundated with punishment. We use guilt and shame to force ourselves into doing what we feel we should be doing. When we miss our goal, we berate ourselves, and have mercy on me, but guys, we are even known to WITHHOLD FOOD.

Punishment does not teach motivation. It teaches us to avoid punishment. That is it. There is no reward associated with punishment.

Think about it. How motivating would it be to set a goal (or desired outcome, if you’ve been following along lately), work super hard to achieve healthy habits, reach said goal, and get absolutely no recognition, no reinforcement, no celebration. Because, it’s expected of you. You set the goal and now you accomplished it. Whoop-dee-do.

And think about what punishment does to our motivation when the goal isn’t met. Let’s say you worked hard to lose 5 pounds, but in your time-frame, you lost 4.5. With punishment, the only important thing is the half a pound you didn’t lose. You penalize yourself with guilt, food deprivation, and other forms of torture. The 4.5 pounds you lost don’t matter.

What kind of life is that?

This is the way most people function with fitness. They view working out as a punishment, for eating food they feel guilty about eating. There is no motivation except the forced encouragement to do whatever they need to avoid more torture. We don’t celebrate our accomplishments, only focus on what we haven’t done. We force a wedge between ourselves and the beauty which is fitness, based on a false representation it is punishing.

There used to be a stronger focus on forcing animals to do our will, ages ago. Punishment was applied liberally, not just physical, but emotional and psychological manipulations. In the old days, food was withheld as punishment.

But punishment didn’t teach the animals what the trainers thought it would. The animals learned to fear caretakers, and look for opportunities to escape punishment. In the end, the lives of both the trainers and the animals in their care were both deprived of their true potential.

In this new era, zoos and other animal facilities see how much better life is when focused on the positive. Gone are the days of forcing animals to move with whips, nets, and scare tactics. Trainers today teach the animals to voluntarily move where they need to go.

Positive reinforcement had such a remarkable turn-around on the relationship between two species. It brought us together and made a partnership based on trust. Imagine what it can do for our fitness.