I’ve been racking my brain trying to find the words to describe how operant conditioning works in fitness. I’ve even had dreams about it.

Last night, I think I was dreaming about the psychology of bacon. I don’t remember most of it. What I do remember is having conversations with fitness instructors about how positive reinforcement trumps punishment. And then I remembered a couple conversations I’ve had about burpees.

I talk about burpees a little. I love them. Are they easy? Hell no. Burpees make even the most ardent CrossFitter roll their eyes and exclaim “WHY DID IT HAVE TO BE BURPEES?” as though they are Indiana Jones being lowered into a pit of vipers. I am usually very chipper at this point and annoy them even further by stating “Burpees are a wonderful exercise which works multiple functions for your body. They are not a punishment, they are a GIFT.” 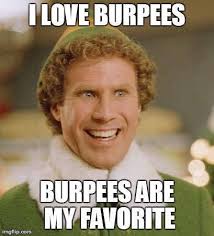 But it’s hard to get people excited about an exercise which exhausts you after three repetitions. Especially when you add jumps over a bar, pull-ups, box jumps, or sit-ups after each burpee.

So, how DO you get people excited about burpees? You must use positive reinforcement and positive motivation techniques.

First, I want to review the whole operant conditioning quadrant. I haven’t done that in a while, and it’s important to the topic.

Make note that positive and negative have absolutely nothing to do with “good” or “bad”. It is neutral in the sense of either adding or removing, nothing more. 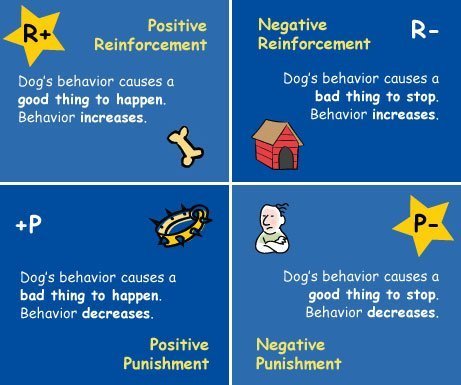 So, how do burpees fit in this quadrant? Most people would exclaim they serve as only a punishment. I disagree. 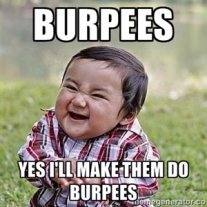 I can’t stand it when we use any form of exercise as a punishment. Late for class? That’s 50 burpees. What are you teaching your students? To not be late for class, or are you teaching them when they are late, to just skip it? Punishing the word “can’t” seems to have a motivating and empowering undertone, but what are you really reinforcing? Members to try hard with new things, or to be quiet and not ask for help?

Remember, punishment is used to teach students to avoid the punishment. It doesn’t teach the exact behavior you want.

Then there is negative reinforcement. Ugh, negative reinforcement doesn’t do anything except motivate your students to do the bare minimum. An example, using burpees, is telling your class they have to do 25 burpees at the end of class unless they beat their previous score. This may motivate people to try harder for the last round, but it still sends the wrong message. That’s because negative reinforcement incorporates punishment as something to avoid. Do the exercise, avoid the punishment. But what do YOU get out of it?

I am experiencing an event right now which I feel is a great example of negative punishment. Today, my gym programmed burpees (bar-facing burpees, if you please). I set my alarm so I could go to the class before my Masters class I teach. But my allergies were bringing me to my knees. I skipped the class and went straight to the class I instruct. Later, I found out, it may not have been allergies, it may have been a stomach bug. I slept the remainder of the day, skipping not just the burpees, but my pilates class, swimming, and ZooFit workout with Chris.

How is getting sick negative punishment? Because I was not able to perform how I wanted to today, I may try in the future to protect myself better while I’m at work. If it is allergy related (which, to be honest, I’m not a doctor, it could be related), this teaches me to remember my damn allergy medicine. I really didn’t like missing out on all my workouts for the day. While I’m sure the sleep was definitely necessary, I would rather have been doing the burpees, to be honest. So, I will try to avoid doing things which make me sick, so I can get my workout on. 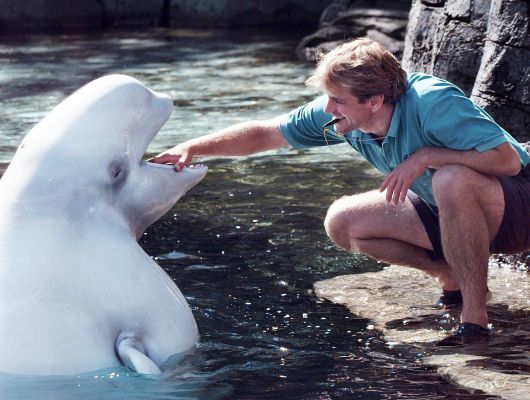 So, how can we make burpees positive?

My husband claims if you want to develop a deeper appreciation of burpees, just program man-makers. Oh, what’s a man-maker? Using dumbbells, drop down into a burpee. Do a push-up, then a renegade row, then another push-up and another renegade row. Holding onto your dumbbells (we aren’t finished with them), jump your feet into a squat, clean the dumbbells and then press overhead.

Chris claims if you do enough man-makers, you will beg to go back to doing just regular burpees, therefore making burpees positive reinforcement.

I had a better idea. I want to install a Burpee Hall of Fame for the CrossFit box. Here is where members can post the number of burpees they have performed and be recognized in a fun, engaging way. My only parameters for keeping track is the burpees must be done at the box, and with a coach present. But otherwise, it’s up to the member to tell the coaches when they deserve to be placed in a promoted status. My thought would be to have a 500 burpee club, 1000 burpee club, 2500 burpee club, 5000 burpee club, 10,000 burpee club, and a 25,000 burpee club.

This way, when members see burpees programmed in a workout, they may still groan a little (I mean, burpees are HARD), but they will push themselves to do them, because they get special recognition if they do.

How about you? What are ways you can change something you loathe into an enjoyable activity, using positive reinforcement?