But why? And will it help you in your fitness?

Recall a few posts ago, reinforcement is the consequence to behavior which increases the likelihood of it occurring again. So, if we want to increase our behavior, why does it matter whether we use negative or positive reinforcement? It still accomplishes the same thing, right?

The terms negative and positive don’t mean good or bad. Negative means something is taken away from the environment. If taking something away increases behavior, that something must be pretty aversive. It is something we don’t want to have. It’s the promise of something we find punishing.

And there we have my biggest issue with negative reinforcement. While it is NOT a punishment, there is the essence lurking in the background, which we work hard to avoid. If the goal is not met, the aversive stimuli continues or is amplified. The only positive is avoiding the punishment, which doesn’t exactly exude inspiration to excel. 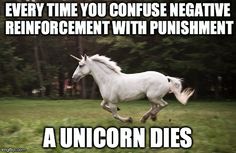 Don’t get me wrong. Avoiding something we don’t like can be incredibly motivating to meet your goal. But that’s about it. You meet your goal, and your motivation is spent.

Look at the natural world. In nature, there are predators and prey. Whether talking about elk and wolves in North America or gazelle and lions in Africa, the relationships are the same. Prey work very hard to avoid predators. Escaping predators is incredibly reinforcing to them. But that’s the end goal- outrun predators.

A gazelle runs insanely fast. They are reinforced for running fast by avoiding death. But a gazelle won’t run all day, or even for an hour. They will only run fast for as long as it takes to escape the lion. No more, no less.

This is the entire mode of operation for negative reinforcement. There is no motivation to work any harder than absolutely necessary to avoid the punishment. Which in some cases, can lead to a different behavior learned altogether (see the effects of punishment). In the best case scenario, it leads to mediocracy.

A popular method for achieving success is a system called Carrots and Sticks. I was intrigued by the program when I first heard about it, because it promised success, or else. Rather than reward your hard work with praise and recognition (what I would call the Carrots), the idea behind Carrots and Sticks is to basically avoiding the Sticks. 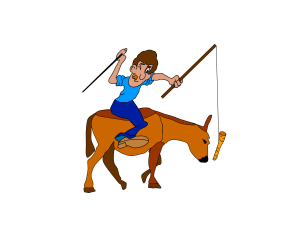 You put money on the line that goes toward a charity you would rather not give money to. Politically, you could give to your preferred party’s opposition. Or if you are for gun control, give money to the NRA. If you are a zookeeper, you could put the money on the line for PETA (every zookeeper reading this just shuttered). This is a high motivation for you to meet your goal. Right?

And it is. It really is. You will work your ASS off to NOT give money to an organization you despise. But when you reach your goal, how good do you feel about it? Only good enough to know you saved your money from the hands of your enemy. Would you continue on, once you’ve reached your goal? Would you be motivated to keep going? Maybe, but there’s a higher chance you would not want to go through the stress and anxiety another time. Plus, why should you keep going? What’s in it for you after you met your first goal? 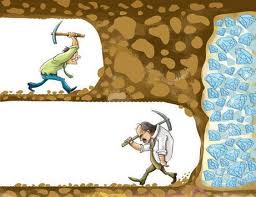 And what if you didn’t reach your goal? You pay your penalty and keep going? How motivating is it to keep going when you’ve been punished despite your hard work?

Negative reinforcement certainly works to get some people started. But as far as building a positive mentality around fitness, working out, and meeting your goals, it falls far short of what we can accomplish with positive reinforcement.

So, now I bet you can’t wait to find out the benefits of applying positive reinforcement to your fitness program. Stay tuned, because this part is my absolute favorite, and I want to give the topic its due attention.