Before the angry CrossFit cult (WE’RE NOT A CULT!) comes to get me, let me start with a couple positives.

I enjoy my CrossFit box. Teaching Masters Classes is one of the main reasons I get up on Monday, Wednesday, and Friday. And I ADORE my 9 am workout crew (including the 8 am folk finishing up, and the 9 am spin class enthusiasts).

What’s great about CrossFit is every workout is different. I don’t think we’ve done the same workout twice in two or three months. There are a couple Benchmark workouts which get repeated every now and then. But no two workouts are exactly the same.

The community and camaraderie formed from CrossFit is unparalleled to almost every other gym I’ve been a part of. Almost. My old gym, Vision Quest (God love that place, I think I would still be living in Seattle if it hadn’t closed down), had the most inclusive and intense community I’ve ever seen. But I love the community of CrossFit. At least most of the community.

But they aren’t the end all be all.

Sorry, CrossFit, but you aren’t the end all be all of athletes.

That’s not to say the CrossFit Games aren’t amazing. I mean, they are EPIC! The strength and endurance of CrossFit athletes is insane. I just want to reiterate that CrossFit isn’t the only way to achieve peak and elite athleticism.

My issues don’t end there, unfortunately.

Recently, Jillian Michaels, of Biggest Loser fame, came under fire for criticizing CrossFit. One of her major criticisms is they vary their workouts, but not their movements. She states there are really only about 20-25 movements in CrossFit which get repeated, and tweaked to “change them”, but it doesn’t hit anything different than the normal exercise. I happen to agree with Michaels.

CrossFit loves their squats. OMG, they LOVE their squats. There are back squats, front squats, and overhead squats. That’s the barbell squat movements. Then there are Goblet squats (front squat with a kettlebell). Air squats, which they love to program 100,000 in a single workout. Oh, and wall balls. Then you have more compound movements which incorporate squats- Thrusters, squat cleans and squat snatches.

The thing is, all these movements work the same muscle as a regular squat. But because it’s a wall ball one day, and thrusters the next, people commend CrossFit for its variety in programming.

There are trillions of ways to work different muscles in the legs without programming trillions of squats. Take Daily Burn for example. Doing the Tactical Bodyweight Training series showed me how you can exhaust, strengthen, and tone your legs without doing a single squat. Frog push-ups, bear squats, Smurf burpees, sit-thrus, glute bridges, mobility stretches, and more.

And why does all the squatting bother me? Well, I mean, I put myself on squat restriction until I lose some extra weight (to lessen the impact on my knees), and start physical therapy (at the end of the month). Which means I am modifying nearly every workout at CrossFit. I don’t mind modifying. I’m the queen. It’s why I’m so good at teaching Masters. All we do in that class is modify. But I really wish I could go through one workout without resorting to my list of substitute exercises. Is that really so much to ask?

To find their competitors, CrossFit hosts a five-week series of workouts called the Open. The workout is announced on a Thursday evening, and athletes have the following week to finish the workout, and submit their scores. Top scorers will be invited to the regionals. The names of the workouts are simple enough. 5 workouts, named for the year they were programmed. 11.1, 11.2, 11.3… were the first Open workouts. This year, being 2019, the workouts are named 19.1, 19.2, etc.

Early in the conception of the Open, workouts were without a doubt challenging to the brim. But they were doable for most people. With minimal scaling, most people completed the workouts for the 2011 open. But in 2014, something snapped in CrossFit’s mind, and they made it nearly impossible for everyone, except the most elite athletes to even remotely finish a programmed workout. 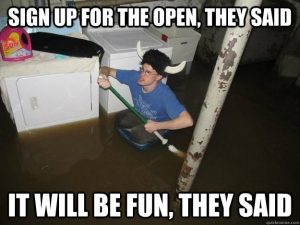 I get that CrossFit only wants the best of the best- the most elite- to compete in the Games. Duh. But don’t call it an Open, if you intend for only 5% of your participants to even be able to complete a workout. And don’t tell me how this is an overall versatile competition when more than 80% of your workouts are about lifting heavy. And I mean HEAVY.

Take 19.2. It’s a doozy. And not even because I couldn’t finish one round of it. I didn’t do it as it was prescribed. I scale the shit out of those workouts. 15 squat cleans at 135 lbs for men and 85 lbs for women doesn’t sound SO bad. But, that’s after 25 toes-to-bars and 50 double-unders. Maybe you could manage that.

Again, I get it to a certain extent. Really challenge your elite athletes so only the best of the best are sent to the Games.

But where does that leave the rest of CrossFit, the ones CrossFit constantly struggles to convince they are inclusive and inviting. Everything is scaleable, except when newbies come to CrossFit during the Open, they do not see an inclusive and inviting atmosphere. They see levels they may never achieve, and that might keep them from trying at all. Others see the prescribed weight, and convince themselves if they don’t go for it, they aren’t worthy. So they end up killing and injurying themselves to prove their strength.

I’ve seen both instances more times than I care to admit. As a coach, I encourage my members to scale as much as necessary, but I can only go so far to convince them. And then, if the member didn’t heed my warning, who is at fault?

Okay, so here comes the pitchforks.

Again, CrossFit is not the devil. People injure themselves in any sport. Injurying yourself in CrossFit doesn’t make CrossFit evil or bad. It happens. I injured my shoulder last year doing CrossFit. It got better, and then I tweaked it again doing Daily Burn.

But I feel CrossFit can do better. For the community. For overall health and fitness. And well, for me.

Put your damn pitchforks away.