As a writer trying to get the word out about conservation and environmental practices, I allow myself a distraction once in a while for a movie as powerful as “Before the Flood”.  While it “stars” Leonardo Dicaprio, it was not an acted film.  DiCaprio has been given an incredible opportunity to reach millions of people and gain access to world leaders to help educate us on the dire straits of climate change by becoming the United Nations’ Messenger of Peace for Environment.

It’s incredibly frustrating and confusing to me that we are living in an age that Climate Change is still questioned, not on whether it is the biggest issue we face (it is), but on it’s actual existence.  It is the most absurd idea I’ve ever thought.  Why would 97% of scientists be disputed?  I am dumbfounded at the excuses people come up with to deny that there is an issue.  I’ve heard so many ridiculous stances, too.  “The trees eat up carbon, and there are more trees in the United States than there were when we first came here”.

“Before the Flood” is a new wake-up call for me.  We have to come together as a nation on this issue.  Other countries are looking to us as an example for the world.  If we don’t accept climate change, and we are the number two producer of carbon emissions on the planet, how can we possibly expect other developing nations to follow protocols that limit production of CO2?  But we have already long passed the time when changing our light bulbs would be action enough.  We need to cease ALL our consumption of carbon emitting fossil fuels.  It’s a sad fact, and terrifies me, too.  Tomorrow is Halloween.  A night when scary is cool, and frightening people is expected, but this is literally the scariest prospect I’ve ever heard.

I am writing a couple of books that ask people to change their eating habits and change their fitness habits so that they can create a positive impact on the planet.  How can I do that if I’m going to be hit with such hard resistance against the very idea of climate change?  It’s frustrating.  It’s infuriating.  And scary as hell.

Zoo-notable: Fantastic Beasts and Where to Find Them 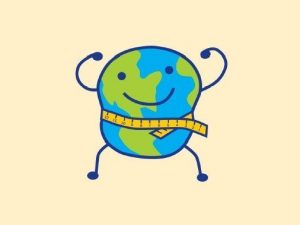