I recognize that debating with the animal rights agenda is incredibly frustrating, for both sides. I often wish I could wave a magic wand and instantly have the anti-zoo folks see things from my point of view, and that I could see things from theirs.

It does seem to me that emotions run rampant in discussions about the validity of having zoos.  I would like to share some of my thoughts on zoos but I would like to try to focus more on the science, if it’s possible.  My emotions often get the better of me, especially in these circumstances, but there is a lot of information out in the universe that can help people come to a much more informed decision.

One book that I recently read called “Ethics on the Ark” was incredibly helpful to see some of the issues with zoos from animal rights’ perspective.  Some arguments are difficult to debate because of a utilitarianism and holistic views on animal rights.  They believe there is no argument to justify having any animal living confined.  Zoos are a place that confines animals.

We build our opinions and beliefs based on our experience.  Whether we want to argue nature versus nurture, it doesn’t matter, but upon a visit to the zoo, one tends to leave with either a positive feeling or negative feeling, and those feelings have shaped how we feel about zoos in general.  Perhaps our first visit was to a world class zoo.  We experienced beautifully constructed naturalistic habitats, animals up close, but still very very wild, and learned from either interactive graphics or roaming docents that spoke with us and answered questions.  Perhaps we caught a wildlife show that highlighted a particular species and brought them to a new light.  We may feel inclined to support all zoos and their efforts for conservation.  On the other hand, perhaps we visited the zoo and saw beautiful exhibits, but also witnessed animals pacing.  Maybe we didn’t see any graphics that didn’t teach us anything we didn’t already know or couldn’t look up on the internet.  We may feel zoos in general don’t live up to the expectation that society places on them to be humane, dedicated to animal welfare, and teaching institutions that they claim to be.

Zoos can stand to evolve more to implement even better care and better welfare to their animals.  That is the nature of zoological institutions.  As the facilities caring for the animals and researchers studying the wild counterparts learn more about a species, it should reflect on the manner they are managed.  Designing a brand new exhibit can be costly and takes time, but these upgrades and improvements should occur within a timely fashion.  And with zoos opening new or rebuilding older exhibits every year, it stands to reason that many zoos do recognize the need to improve the care of their animals constantly.

Zoos state that they are conservation institutions.  I believe this is true from my experience on two counts.  Three if you also count the money they raise for in-situ conservation efforts.  On the first count, they breed some highly endangered species that would be extinct or close to it without support from breeding management facilities.  Whether it’s habitat loss, poaching, human-wildlife conflicts, or climate change, some species are dying at an accelerated rate that births cannot balance out.  By breeding some species in controlled environments, zoologists can bring back the balance of populations to those animals.  Przewalski horses, black-footed ferrets, California condors, and golden lion tamarins are some of the more charismatic species that zoos have had a first hand in saving through breeding and reintroduction programs.  But thousands of insects, mollusks, fish, birds, reptiles, and amphibians have been saved by zoo breeding programs, most never even seen by the general public.  Woodland Park Zoo in Seattle, for instance, has one of the only three breeding facilities for Partula Snails, which are extinct in the wild.  Woodland Park Zoo and its sister institutions are working hard to raise the numbers and then release back to their native island.

The second way zoos contribute to conservation is through inspiring the public to learn, care, and act.  This concept is also debated but again, I’ll use my experience to state my case.  We don’t know who among us will become the next great American or even worldwide conservationist.  It could be the child who is allowed to visit their favorite places on earth and see their favorite animals up close in the wild.  It could also potentially be the child raised in one of the poorest neighborhoods in the city, but gets to go to the zoo for a school field trip and experiences animals in a new light.  This spark could drive the child to excel in science and continue to learn as much as he or she can about their favorite animal.  They may never be able to visit that animal in the wild, but they become such an advocate for the protection of that species, they inspire not just their family and friends, but their whole community, and possibly even the world to do their part to conserve.  And that spark starts at allowing anyone to visit the zoo.  I have seen children’s eyes light up after feeding a bird on a stick.  I have witnessed the transformation of children from being enthralled with elephants to learning more about elephants to advocating for elephant conservation to even inspiring their entire school to help contribute to elephant conservation.  I, myself, fell under the conservation spell due to a visit to SeaWorld.  I became entranced with dolphins and did everything I could to learn about them and their environment.  I discovered ocean conservation this was and started a campaign in my hometown to ensure dolphin safe tuna was available.  I also worked on beach clean-ups, for the lakes and rivers around, as I saw the connection of the environment in every action I took to care for the ocean and my flippered friends.  Because of this, no one will ever be able to convince me that zoos and aquariums don’t do enough to inspire education and conservation.  In fact, that is one of the aspects I am most proud of zoos.

Zoos do more than just contribute funds to conservation efforts and research.  Our world, it seems, is getting smaller.  Wild places are become harder and harder to find.  Even now, most elephants and rhinos in Africa and Asia all live in national parks or wildlife sanctuaries.  They are wild animals living in their natural environment, but they are managed.  The rangers don’t feed them, or train them (although there are a few trained elephants for rangers in certain areas, but I’m talking about the wild counterparts).  But those animals are managed.  And as our world continues to get smaller, we will see more species living in similar conditions, and being managed more and more by humans.  Where will rangers and researchers get their knowledge of animal management if not for facilities that are already doing it.  Why make these resources re-invent the wheel?  Because of veterinary research done in zoos, a team of elephant specialists travelled to an African wildlife preserve in 2012 and performed the first ever vasectomies on 15 bull elephants.  Why is that significant?  Because in that wildlife preserve, they were having to cull elephants every few years due to over-populations within their borders.  But if they “neutered” the top breeding males, they would be safe from culling for a significant number of years.  Zoo veterinarians used zoo elephants to perform their critical research to ensure the safety and well-being of the wild elephants.

Management of species, even in their natural environment, is going to get more intensive.  Giving vaccinations, providing enrichment to sway animals from engaging in human activities, and preventative health care are all in the near possible future.  Zoos are already contributing by sharing their knowledge of animal husbandry with organizations overseeing management of wild populations.  If all wildlife is going to be controlled anyways, having zoos now will benefit the species in the long run.

I am not a zookeeper currently, but the profession runs strong in my veins.  I have worked so hard to ensure I stay up to date with latest innovations for providing great care to my animals.  I have attended conferences, professional development courses, and workshops to constantly learn more and be more.  I don’t just owe it to the animals I care for, I owe it to the planet.  I strive to teach the community about doing their part to conserve, and my best teaching tool has always been an animal in front of me.  This is a personal opinion.  I feel the zoo hired me to do a world-class service and I intend to do it to the best of my ability.  Making sure the “stars” of the zoo, whether that’s an elephant to one person, or a butterfly to another, shine brighter than one realized was possible, is my goal.  Great care, great treatment, and wonderful welfare are what makes that work.

I have many strong feelings with certain arguments.  Those specific statements don’t matter right now.  I know in my heart that what I do is morally right.  It’s not just right, it’s necessary.  We keep on keeping on, and we will make a difference! 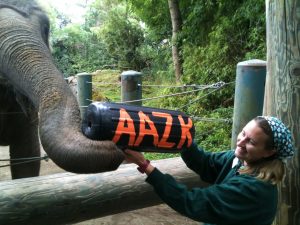 How to Eat Challenge- Week 1