I have been looking for a way to eat more animal friendly lately.  I have a few issues with cheese, but for the most part, I actually really love it!  Cottage cheese, cream cheese, cheddar, mozzarella.  But the more I learn about our food industry, particularly hear in the United States, the more I am realizing that I should say farewell.  That is, until I borrowed a book from the library that may have actually changed the way I cook. And now I can have my cheese AND eat it too!

I have been searching for non-dairy alternatives to cheese and I haven’t been able to find a good tasting one on my own.  Store bought soy or fake cheese have two strikes against them 1- they usually have palm oil in them.  And 2- they taste disgusting.  Sorry, fake cheese, truth hurts.

But I found this little gem of a cookbook called “The Cheesy Vegan” which had recipes for all different types of cheese and they used absolutely ZERO dairy.  Instead, they had more of a nut base to them, but for the most part, they tasted pretty good.  Well, at least when I prepared them with other recipes that called for cheese, they tasted great. 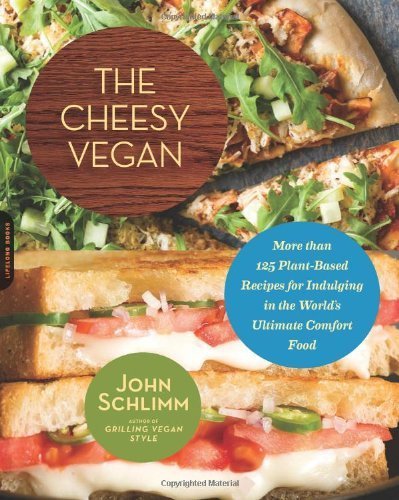 Things I made with homemade vegan cheese:

Pre-heat the oven at 350 degrees, and pre-heat a skillet over medium heat and brush the bottom with olive oil.  Slice eggplant into discs, and soak them in water or almond milk.  Take a soaked slice of eggplant and dip into breadcrumbs to coat.  Place in skillet and fry both sides for 2 couple minutes, or just until brown (Do I really have to say to do this with every slice?).
Once brown, place slices of eggplant in oiled baking dish.  Cover the layer with tomato sauce.  Then spoon your vegan mozzarella over the sauce.  If you have enough eggplant to make a second layer, make sure you save enough sauce and mozzarella to cover that layer as well.  Don’t worry, the eggplant will taste just as good with one or two layers.  It won’t matter.
Once you have all layers covered with sauce and mozzarella, sprinkle the vegan Parmesan over the top layer.
Place in oven for 30 minutes, or until the heavenly smell becomes too consuming and you have to EAT IT NOW, ALL OF IT!!!

SPINACH ARTICHOKE DIP
I tried this recipe this past week, and I think it needs double amount of spinach and artichoke for the amount of cheese I put into it.  I guess I could also use half the amount of cheese…..but why?  So the recipe I’m writing up is doubled from what I made the other day.  If you want to make a half batch, that should be simple enough.

2 packages frozen spinach, cooked according to package
2 cans of artichoke hearts (if I was savvy to make this without canned food, I totally would, but I’m a tad bit lazy when it comes to artichoke cooking)
2 cups (1 batch) Vegan Mozzarella
2 cloves garlic
1 tsp salt
1 cup Manchego cheese, shredded (okay, so that’s not vegan, sue me- it’s delicious)

Pre-heat oven to 350 degrees.  Slice artichokes into quarters and place in large saucepan with cooked spinach.  Add the mozzarella, garlic, and salt.  Heat over low temperature and mix until well blended and cheese has melted into mixture.  Spoon mixture into a baking dish and top with shredded Manchego cheese.
Place in oven and bake for 30-45 minutes, or until smell drives you crazy with hunger. 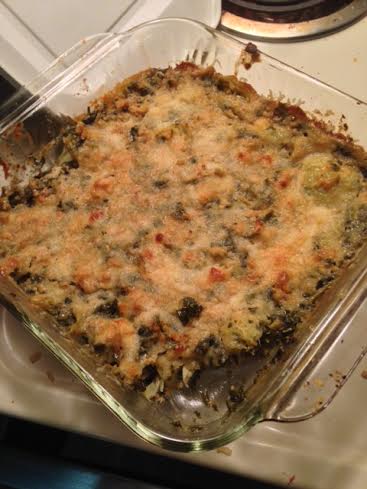 I also made grilled cheese with the cheeses.  Chris enjoyed the “American Vegan Cheese” when I made it last time.  I tried making it again but ran out of red peppers, so we’ll see if the red peppers make it or break it.  And I made a cheesy potato-broccoli soup with the Vegan Cheddar recipe.  The recipe for the cheese and the soup are both in the “Cheesy Vegan” cookbook.

I also want to try making quesadillas and my casseroles with these cheese recipes, but I haven’t had the time or motivation to try them yet.  And I’m nervous, because my casseroles rock as they are, so I don’t know if I should tempt fate.  They are made with goat cheese, which I feel is better than cow’s milk, but it’s still dairy…..

All in all, I think I came out on top by borrowing this book.  It’s getting me to experiment more with foods I hadn’t tried before (nuts as a base for cheese, nutritional yeast, agar-agar, and tahini).  I want to play with the recipes a bit more and see if I can tweak them enough to truly make them my own.  But it’s great to have this in my pocket in my arsenal of cooking tips and tools.