One of the most incredible experiences of my career was the chance to work with elephants at Woodland Park Zoo in Seattle.  To build a unique and special relationship with such an enormous creature that could easily have crushed me as much as look at me, was, in a word, awesome.

What most impressed me when I first started at the elephant barn was the amazing bond the keepers had with each of the herd members.  Chai, our youngest elephant of our herd of three, had a special greeting reserved just for Russ, a veteran keeper who had been working with Woodland Park’s elephants for over twenty years. Every morning she would chirp at him and then open her mouth.  Now, whenever she did this for anyone else, she wanted food to be placed there, preferably a banana or melon.  But when she opened her mouth for Russ, she was soliciting a tongue rub. Russ was the only person she was comfortable letting touch her tongue in that manner.

The eldest of the herd, Bamboo, definitely had an amazing bond with Chuck, an older, retired keeper who still came by the zoo on occasion to visit.  When Chuck visited, Bamboo would get completely wound up, squealing and circling her surroundings excitedly.  Even at her age of mid-forties, she reverted back to a playful youngster when she heard Chuck’s voice.  When she couldn’t contain her excitement anymore, Bamboo would express her undying love and affection for Chuck by (are you ready for this?) peeing herself.

All the elephants had their distinct way of expressing themselves to each individual keeper.  I knew I had a long road ahead, but having the kind of friendship that Bamboo and Chuck demonstrated, or close intimate moments like Chai and Russ shared were definite long-term goals I carried.

When I began working the elephants through their daily husbandry routines, I was specifically warned about Watoto, our only African elephant, and dominant boss-lady of the herd.  She had a notorious history of “not liking women”.  A brash and impulsive elephant, I was told many stories of Watoto charging at women, a behavior she was reported not repeating around men. I saw her disdain for females in action before when Dr. Kelly, our main veterinarian, would visit and Watoto would tusk the bars and bang her forehead against the mesh where Dr. Kelly would be standing to look at her.

The idea of an eight thousand pound wild animal barreling toward me with malice on her brain, was just about the most intimidating thing I could imagine. But while I was wary of Watoto’s moods, it was difficult not to fall in love with all her mannerisms.

When she was happy, or content, Watoto made a rumble noise, which sounded like a soft purr that you could feel all the way down to your bones.  When she was fond of someone, she would produce that low rumble for them, lowering her head to have them scratch her ear.

I envied the men I worked with at the time for their kinship with the feisty girl.  While I would have loved for Watoto to accept me, I thought it was very unlikely that I’d ever receive the special gift of a Watoto rumble.

Because our day to day routine with Watoto required treatment for a tusk that had broken off and therapy for her stiff joints, regardless of Watoto’s feelings toward me, the team needed her to cooperate with me.  To compensate for me being a girl, I made sure to keep our sessions short and sweet, and lots of fun.  I saved her favorite treats for when we worked together.  I stayed positive and encouraging even when she was being obstinate and refused to listen to me.

When we would trim Watoto’s feet, I ensured that she received multiple breaks throughout the session where she would be allowed to roam around, and come back only if she felt like it.  In the beginning, she didn’t come back that often. It was probably frustrating for my colleagues when they wanted to finish cleaning Watoto’s feet, but she had had enough.  It must have been just as frustrating to them for me to be completely okay with her refusal.  But eventually, when she learned it was totally her choice, and that I was still going to give her her favorite food rewards when she cooperated, she began to come back for a second trimming, or a third, and sometimes even a fourth session.  Being patient with Watoto really paid off, for her well-being and my sanity.

Over time, from my consistent attitude of positivity when dealing with Watoto, I developed quite a reputation among my colleagues.  In the three years I had been working with her, Watoto had never charged me, something that my coworkers and I refused to voice out loud lest we jinx my lucky streak.

The biggest compliment I received from my fellow team members was when Watoto would be acting particularly stubborn, and I would get asked to pair up with Russ to work with her.  She responded to us very well and we had the most success of getting her to cooperate, especially when it was imperative that we succeed.

These quiet compliments from my teammates were nearly enough for me.  Nearly.  But one day the highest compliment came my way via no other than Watoto herself.

It was a crisp, cool morning.  I was opening the barn to start my shift, and I walked into the animal area to check on all the girls.  Chai sauntered over to me, begging for her usual morning treat.  But what happened next made my heart skip two beats.

Watoto gently nudged Chai out of the way.  She then lowered her head down to my level where I could have easily reached her ear, and then, she rumbled.  I looked around the barn expecting someone else behind me.  But there was no one else there.  Nobody had Watoto’s attention except for me.  She was rumbling for ME!

From that day on, even when Watoto was obstinate with me, or ignored my requests, I knew my patience and consistency had paid off in the biggest way possible.  Watoto was my girl, always and forever, and with one little rumble, I knew I was hers.

This story is sweet and sappy, but it has a huge moral to anyone looking to change their fitness and health for the better.

The number one tip animal trainers share with newcomers to the field, or those interested in pursuing such a career is to always have patience.  In fact, when I did presentations to the public, the most popular question I’d get asked was “What does it take to be an animal trainer?”  This was my answer: “There are three things you must acquire in order to work effectively with animals.  The first is patience.  Animals can’t speak to us, so it takes patience to understand what they might be trying to convey.  The next thing you need is patience.  Animals have free will like the rest of us, we can’t make them do anything they don’t want to do.  So what do you think the last requirement is?”  The audience would laugh and respond “PATIENCE!”.

Yes it was a joke, but it was markedly true back then and it is still true to this very day.  I honestly think if I strolled into the elephant barn on my first as an elephant keeper, or even 100th day, and expected Watoto to rumble for me without building up that relationship, being consistent, and remaining patient with her, I have little doubt that she would have charged me in a heartbeat.  I worked with Watoto for over three years before she graced me with that wonderful gift.  Three years! I wasn’t working specifically toward the rumble, that was just the icing on the cake.  But it took a very long time to earn Watoto’s respect, trust, and ultimately, her friendship.

If you want success in your fitness program, take a page or two from the animal trainers handbook.  Be very patient with yourself. Changing your life for the better will take time.  We will develop better habits and create a lifestyle. Keep in mind, we did not get where we are today overnight.  We are not going to get where we want to be overnight.  Make no mistake, you can make progress toward your goal overnight!  I promise you that can happen. It’s possible for you to make huge strides in a short amount of time. However, there is a chance you may go slow at first instead.  It may take longer to achieve certain goals. Remain consistent and patient with your program, and with yourself. The outcome will blow you away!

And when you achieve that Watoto Rumble, it will make all your efforts worthwhile, and success will be that much sweeter. 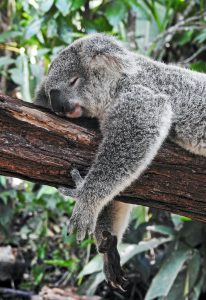 Lessons from a Tiger