I had a weird day, and found it really hard to connect things to the Conservation Fitness Program specifically. Then I realized it was the general mentality of ZooFit.

It was a weird day in the sense I was super busy…ALL DAY. First thing this morning was Sloth Army. Only two people were able to make the run today. One of them is not comfortable with running quite yet, so I decided to slow things down even more and do some mobility movements with the two of them. We practiced everything from butt-kickers to calf stretches, and we found quite a few stretches and movements which felt really good, and some which were great for their level of fitness. Then, one member wanted to do a little bit of running, so we ran around the trail a couple of times.

So, we had a nice and easy Sloth Army today. Next trail run will be different. As long as it’s fun, engaging, and keeps people coming back.

After Sloth Army, I headed to Oak Harbor for my dentist appointment. I am having some major issues with my teeth, so we (as in the periodonist and his team) are trying to nip that shit in the bud by having cleanings every 6-8 weeks. Since my last appointment, I have purchased a water flosser, started salt water rinses, and even had anti-bacterial medication to help kick some gum disease ass. Honestly, I think it’s working. I did ask for nitrous because the previous cleanings have been hard for me to handle. But this time was a breeze, and I told them next time I didn’t want it. I still feel like I have a major lisp after the dentist, but other than that, I think I’m finally getting ahead with my oral hygiene.

My appointment lasted a little longer than I hoped, so I was late for my writing group. But I’m glad I went. My friend was trying out her new oracle cards and asked if I wanted a reading. I’m not normally into mystical philosophies, but I figured, why not?

My reading was pretty interesting. It was hard for me to figure out, and I’m not sure I’ve quite interpreted it completely. I asked what path was better for me in promoting ZooFit. I have an opportunity to continue trying to reach zoo professionals and making my name in that community. I am planning on attending two conferences next year, doing talks for zoos and AAZK chapters who want me to present on ZooFit, and promote this unique angle of conservation through fitness. Or I can look into the FITNESS professional community and start to build up a platform with them. I can get certified as a Group Fitness Instructor, attend two conferences on the fitness industry, and see where that can take me. Figure out how to create a hook to sell ZooFit to fitness professionals.

Focusing on both is a little frightening and overwhelming to me. I feel I should pick one. So I thought I’d ask my friend’s oracle cards. The answer was a little muddy. The card representing me was about “missing my mark” or “wrong timing”. But it was kind of in reference to what I thought was the entertaining aspect of the program. Did this mean since I WASN’T being the entertaining self and focused on serious fitness topics I was missing the mark, or if I focus on the stories behind the fitness program, I would miss the mark?

The other cards weren’t helpful to me either. The next card referred to the nurturing and mothering side of things. The only way I can personally interpret this is how I am trying to take care of Chris. My friend feels it’s in a broad aspect of Mother Earth, and taking care of our mother in that way. But again, I’m not quite sure what that means either.

Later, after the reading, on my way home, I thought maybe the reading was trying to steer me in an even different direction. I’m not sure I want to go that route, but honestly, the story of me and Chris and dealing with his kidney disease is a pretty epic tale. And I have found it relates to fitness in a very profound manner. I mean, if we didn’t live a healthy lifestyle before and during his kidney disease, we and the doctors are positive this would have ended very differently, and not for the better.

When I came home, I didn’t have much time to process anything, because I had to get ready to go to Blooms Winery for their open mic night. I haven’t done an open mic since before Chris had his transplant, and a friend wanted to come with me, so I picked her up and headed to the winery, which just opened literally across the street from me.

I shared my story of doing birthday parties as an educator in Florida, and why they were part of my reason we never had or wanted children. It’s a pretty hilarious story, and I’ll probably share it down the road. Blooms guests seemed to enjoy it as well.

My day:
Breakfast: I slept in before Sloth Army, so I was a bit of a naughty girl, having my tea and later a couple of Energy Balls
Lunch: Okay, got into the swing of things by eating a large portion of the Quinoa Chickpea Salad. I don’t know what I did to it this time, but it was delicious! 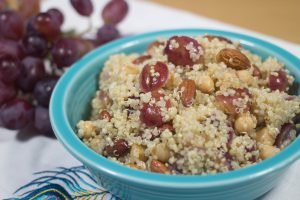