I have tried many, many diets and eating lifestyles. Many. I have seen the benefits to them and the downsides to each of them. But I have to admit, if you were to choose one simple lifestyle which would have the best impact on the environment, and the most potential to change your life for the better, I would recommend going vegetarian.

This is in the most general of terms. I know a few farmers who are ethical and humane in raising their livestock. The animals living on such farms have one bad day. Unfortunately, these farms and the people who run them are too few and far between. Most animals, especially in the United States, but all over the world, live in harsh conditions we would shut down any zoo or laboratory for forcing their animals to live. But because we’re just going to eat these animals, it’s fine, or we ignore it.

I talk a big talk, but I honestly don’t advocate going 100% vegetarian. I mean, unless you want to. I’m more about sustainable eating habits for you and the planet. If you are a vegetarian and wouldn’t dream of going back to eating meat, I will never be the one to tell you you should. But perhaps I can still impart some tips for your lifestyle to help you achieve your fitness goals and have a better impact on the environment.

I myself am a flexitarian, a term I discovered when trying to explain my type of diet. I have not completely abolished meat, but I don’t eat much of it. In fact, if I were to calculate how much meat I eat, I would be willing to bet it falls somewhere in the 15-20% of my weekly menu. The meat I do eat is significantly less than just a year ago. Dealing with chronic kidney disease showed me and my family how to eat nutritious meals with less protein, and save some of the kidney function my husband had. Even after his transplant, we still practice a bit of the renal diet. We found the flexitarian diet works best for our dietary needs.

But enough about me. Who wants to get to numbers and how going meatless helps improve our health and wellbeing of the earth?

Many people complain that we can’t get enough protein from plant material. This isn’t true. Pound for pound, soy and beans have almost the same amount of protein as red meat. Beans just also happen to contain lots of fiber, less calories, and no saturated fat. Reducing your intake of red meat can lower your cholesterol, decrease your risk of heart disease, and prevent certain cancers.

Soy has in recent years received a scary reputation for being harmful to our bodies. In recent studies done in 2016 and 2017, it was shown these concerns are low risk factors, though. Consuming soy in products such as tofu, edamame, tempeh, and soy milk are safe in moderation. Avoid them in soy/protein isolate products such as protein powders and protein bars, if possible.

Considering many factory farms producing cattle for consumption hardly have room to talk in terms of safe to eat, I would bet my money on the plant proteins. Dairy cows are pumped full of antibiotics and growth hormones. Cattle are given steroids and a completely unnatural diet to fatten them up faster so they can be taken to slaughter quicker. The soy and corn grown to feed livestock are often the dirtiest products around- pumped with pesticides, herbicides, and poisons. And yeah, we are eating that because it’s in the food our food eats.

If soy frightens you, there are plenty of other proteins to choose from. Quinoa, rice, and oats have a fair amount of protein in them, and they are complex carbohydrates, so you get more bang for your buck with them. Spinach and nuts are great whole foods approved on the Atkins diet, Paleo, and even the super strict Whole30 as vegan options for getting some protein. Legumes are a terrific source for those looking to also improve their fiber intake. For the vegetarians who aren’t opposed to eating animal PRODUCTS, cottage cheese and free-range/pasture raised chicken eggs are excellent sources of a lot of nutrients.

If everyone in the United States cut out meat from all their meals just one day a week, it would be the equivalent to taking more than 7 million cars off the road (Meatless Monday). Going towards a more plant based diet has positive effects on other environmental factors as well.

Statistically speaking, it takes about 2000 gallons of water to produce one pound of meat. Sounds insane, doesn’t it? But cows and living animals need to drink water, their barns and stalls are washed with water, and it takes water to grow THEIR food. How much water does it take to produce a pound of plant protein? About 200. With water conservation becoming more and more important to our lives and the livelihood of the world, this is staggering.

Eating less meat also cuts down on carbon emissions. The meat industry is accountable for 14% of greenhouse gases around the world. So, if riding your bike sounds too difficult for you to try as a way to reduce your carbon footprint, try going vegetarian for a little while.

In today’s world, it’s easy to find great recipes for flavorful and delicious vegetarian entrees. I’ll share many of them with you as we go through this week. Let me assure you, giving up meat does NOT mean you have to give up on taste.

A small word of warning though. Just because it says it’s vegan or vegetarian friendly does not automatically equate to better for the environment, or for you. The number of times I’ve been told OREOS are vegan is absolutely mind-blowing. I don’t care if they are vegan, they are not good for anyone- you, your body, or the planet.

Also, in today’s smaller, more accessible world, it’s easy to lose sight of the impact even healthier options can have on the environment. Bananas do not grow in the Pacific Northwest. Yes, it could be organic, but shipping something across the globe is not the better option compared to even a chicken which was pasture raised at a local farm. These are principles which need to be weighed and measured before diving into a fad or trend.

This week will be interesting. I am hoping to find a good balance of energy, motivation, and nutrition in a healthy, impactful way. 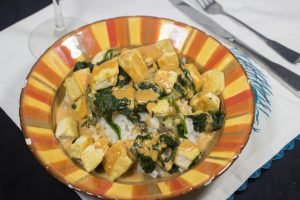 Mood- had a small meltdown during ZooFit because I was really struggling with good form for my push-ups. Switched to the incline, and while it made it easier, I kept better form. By the end of the workout, I was feeling much better.

Challenges- Sigh, Chris and I have VERY different fitness goals right now. I am trying to lose weight, he is trying to gain/maintain weight. But since I’ve designed the Conservation Fitness Guide to accommodate two people, he is a little stuck with the foods I have planned or prepared. And breakfast this morning was a little wimpy. I can’t do much about it right now, but I changed the recipe for the future, and hopefully it satisfies participants’ morning requirements. Chris received an allowance of eating some leftover hummus to eat. I didn’t stray from the meal plan at all, and I found my calories were a little heavy at the end of the day. But other than that, I feel pretty good.