When a dolphin does a fantastic bow (arced jump out of the water) in the middle of the pool, how does the trainer convey the exact moment the dolphin earned a reinforcement? It may not have ever occurred to you before, but it’s an interesting dilemma, and one we need to examine ourselves in our fitness journey.

If the trainer waits until the dolphin comes back to the stage or the wall where the trainer is standing, then the dolphin associates the return to the trainer with the reward. Next time the trainer asks for the bow behavior, the dolphin may swim away from the side of the pool and then instantly return. And the dolphin gets frustrated. It earned a reward last time, why not now?

We get the behaviors we reinforce. If we reinforce the dog when they are no longer sitting, they aren’t getting reinforced for sitting.

But animal trainers also had another contention. How do you get an animal’s ATTENTION when they are doing a behavior far away from the trainer. The dolphin may not even be watching the trainer. They might be focused on where they are jumping or swimming. Pointing or throwing the treat won’t always help either. The animal may not see it until it’s too late to understand why they are getting a reward.

Training animals in the field means you need to let the animal know what they are doing *right at that moment* earned them a reinforcement. And it may not be possible to give the reinforcement immediately to the animal. I recently watched an amazing presentation on using rats to detect landmines and even DISEASES. How on earth do you reinforce a rat for detecting landmines without being right there next to them?

The dilemma of delaying reinforcement without reinforcing different behavior was resolved with the invention of an event marker, or bridge. I like the term bridge because it describes what it does in a poetic way. A bridge connects the animal’s behavior to the reinforcement. It literally bridges their effort to success. 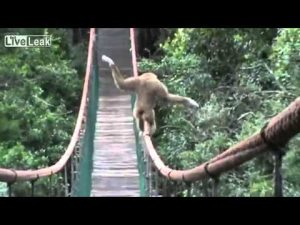 This is an important component, because researchers on the science of behavior change recognize the direct link between effort and success. The longer the gap between the behavior and the reinforcement, the weaker the behavior change and performance. So, when we reinforce something, we want to do it IMMEDIATELY. It’s important to the animals, and to ourselves.

But, just like a trainer can’t reinforce the dolphin at the exact moment they hit the highest point on their bow, we often can’t receive immediate gratification for our behavior change.  So, we use a bridge.

Have you ever seen a dog trainer use a little box which makes a clicking noise? Or watched a dolphin trainer blow a whistle and all the dolphins return instantaneously to the side of the pool for a treat? These are examples of a bridge (the “clicky” box is called a clicker, btw). It allows the delay of reinforcement while still providing immediate gratification.

When we are establishing new healthy habits, it will be hard, if not sometimes impossible to immediately reinforce our actions. Maybe we are at work and eating a healthy salad for lunch, logging it in our food tracker. How do we let our brain know we are doing exactly what we need to do in the moment, even if we won’t be able to receive our reward (a bubble bath, watching a movie, playing your video game, etc) until later?

Use a bridge.  No, I’m not telling you to go out to the pet store and buy a clicker. Unless you really want to. I’m not telling you NOT to do that. But you can establish an event marker to let yourself know your healthy habits are recognized and will be rewarded.

I designed something of a ZooFit Healthy Habit Tracker when I was creating a slew of healthy habits. In the beginning, I reinforced my efforts for every time I completed a new habit. I put a star on the back with the date, so I knew how many times I drank water, or logged my meals. Every time I had a craving for a cigarette but didn’t have one, I gave myself a star. When I returned home, or at least had an opportunity to appropriately reinforce my actions, I would go through my cards to see how well I did. 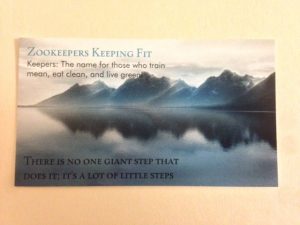 However you decide to reinforce your behavior, make sure you are bridging your efforts with success. Use some mechanism to remind yourself you earned rewards. Make the connection with your brain and body. And make the best version of yourself stand out in a positive light.