For the past two weeks, Chris and I had a free trial for a new fitness facility that is opening in Beaverton called Orange Theory Fitness. It will be the first one to open in Oregon and I was really glad I had the opportunity to try it out (more than once) to see what it would entail. I also wanted to give an honest and thorough review of this facility to practice some critiquing and put some of my fitness evaluating to use. For my Seattle friends, I do believe there is one or two opening in the area, and this review might help you decide if you’d like to check it out.

Orangetheory is a modern day fitness center. It revolves around state-of-the-art equipment and modern technological fitness devices. Every member is given a heart rate monitor that will read their heart rate throughout the one hour workout. There are several large screen monitors around that display your name and show your heart rate. Throughout the workout, you will be pushed at different intervals. They use terms like “Base” for your normal zone, which they color coded green for your heart rate, “Push” for your higher intensity interval, which they coded as orange, and “All-out” for maximum effort and intensity, which if you are maxed out with your heart rate would put you in the red zone. They call themselves Orangetheory because they ideally want to get you in the Orange Zone for 12-20 minutes for optimal fat-burning and metabolism, even after your workout. It’s a very fitness savvy philosophy and I feel it educates and gives members empowerment to understand their fitness better rather than just simply have a trainer say “work harder”. They are dictating the intervals but ultimately, it’s up to you and seeing where you are on the monitor can help give you that push.

Workouts are divided into two segments- treadmill (ultimate cardio where a majority get in their Orange and Red Zones) and the Rowers/Floor exercises, which they claim is their strength segment, but it’s really a met-con, body conditioning segment. You spend a few minutes on their rowing machines and then go to a circuit portion. It’s very much like a few short AMRAPs. For instance, one circuit was bicep curls to shoulder press, tricep kickbacks, and 200 m row. Another was plank pike, plank reach/punch, and crunch, and another circuit was woodchoppers, lunges, and squats. You spend approximately thirty minutes in each segment for a one hour workout. On the treadmill the coach will give instructions to be at “Base” (green for heart rate), and at variable intervals have you “Push” or “All Out” to get you in the Orange zone.
Chris and I were lucky to try it four times over the last two weeks and I feel we experienced some great things with those four workouts and some definite issues.

First, I really want to state how INCREDIBLE the treadmills and rowing machines are! I mean, STATE OF THE ART! Treadmills have some give to them as you run so they never bothered my knees. Even in an all out run. And the rowers were neat. They were water based resistance and even made a swishing noise as you rowed.

The trainers are in great shape, but I guarantee they didn’t get that way by only doing Orangetheory. They are very helpful and approachable. Several times AJ, one of the trainers would come over to Chris during the floor portion and give him a modification to increase intensity, or improve my posture. He would make sure we were enthusiastic and energized during our high intensity intervals on the treadmill as well.

I love seeing your progress and effort on a screen in front of you. It really was incredibly motivating for me. Unfortunately, this is also where I have a major complaint about Orangetheory. I guess my heartbeat is too light for their monitors to read right. So I could never get in even the green zone, and seeing me not get in the green zone the first class, I tried pushing myself harder and maybe even borderline over-exerting. But I couldn’t get my monitor to read higher than 70%. And the other three classes were exactly the same issue. So it wasn’t the monitors. It was something with my heartbeat/heart rate. Chris and I joked that I just wasn’t working hard enough and I need to push myself until I’m being carried out in a stretcher from passing out. But I worked my ass off. But I personally liked seeing my progress on the board, so the heart monitors not working on me was a definite negative.

But for the other members, this is a great way to measure progress and even compete with yourself to do better. Orangetheory also emails your performance results so you have each workout in your own records. You can see how long you were in each zone, your max heart rate, calories burned. It is really motivating.

There were a couple negative aspects that Chris and I really didn’t like, though. Their cancellation policy was really deeply routed in positive punishment and negative reinforcement, and doesn’t allow for life emergencies. If you are more than five minutes late for a class, you aren’t allowed to join the class, they give your spot to someone on the wait list, and they charge you an additional $15. If you cancel less than 12 hours before a class, they charge you $11. So you end up paying for a class twice and not even able to take it? Seemed unreasonable to us.

Also, there wasn’t a sense of community like I experience at Crossfit. Everyone was doing their own thing and no one paid attention to anything but themselves. Chris and I paid attention to each other, but that’s about it. At the end of class, the trainers would go over the class results, and this is an opportunity to build something of a community by celebrating those with highest calories burned or best Orange zone results. And they did recognize those that did well, but it wasn’t community driven. No one encouraging the rest of the group except the coaches themselves.

I’ll say this. Chris and I were incredibly impressed with the workouts we got from Orangetheory. If the monitor had worked on me, and we had a little more money coming in (ie- if I had a job), I think we’d be tempted to sign up. I feel I would benefit from high intensity interval training like this.

Orangetheory is terrific for those that want to lose fat/weight. If you’re looking to gain muscle, or increase strength, I wouldn’t recommend it.

The one hour seems long and grueling, but it goes by fast. Trust me, it doesn’t seem like an hour. And it’s really about the atmosphere. Because Chris and I tried to duplicate an OTF workout at LA Fitness, and it was horrible and the longest thirty minutes I’ve spent on a treadmill in my life.

So here’s my rating for Orangetheory:
Facility- 10
Staff/coaches- 8
Experience- 5 (not truly fair bc I have a heart beat issue that makes my ruling a little biased, but this is my rating)
Pricing- 6
Community- 4
Compared to gym- 8
Motivation- 7

I’ll be happy to divulge more if you are interested or have more questions. Just message me or leave a comment.
Tomorrow I will thoroughly critique VillaSport, which I hope I can be objective because right now I consider this my Fitness Nirvana. 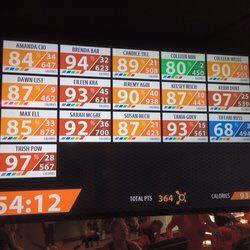 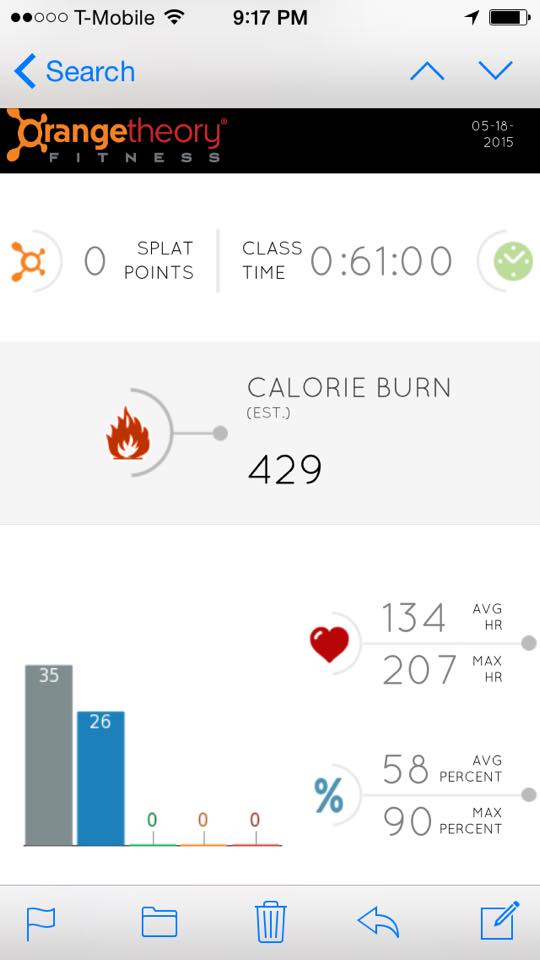 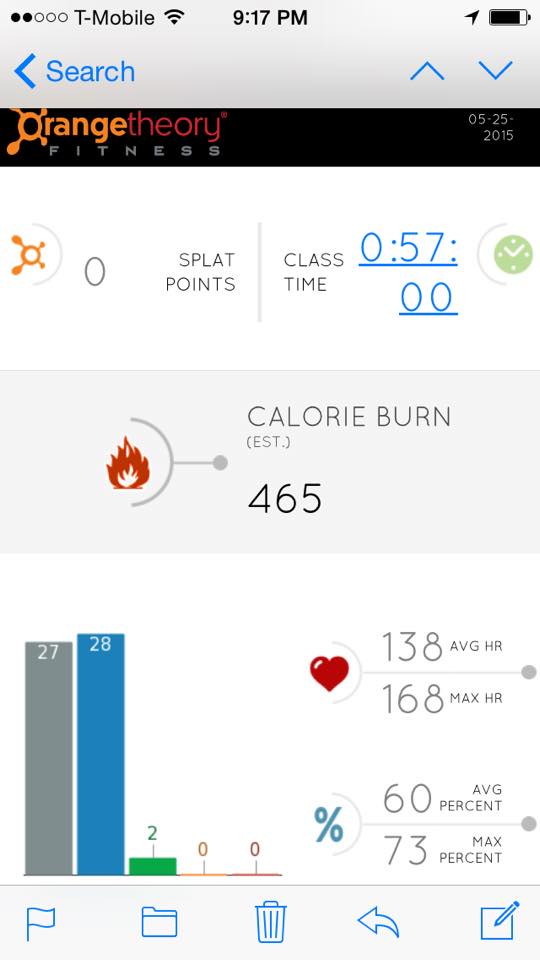 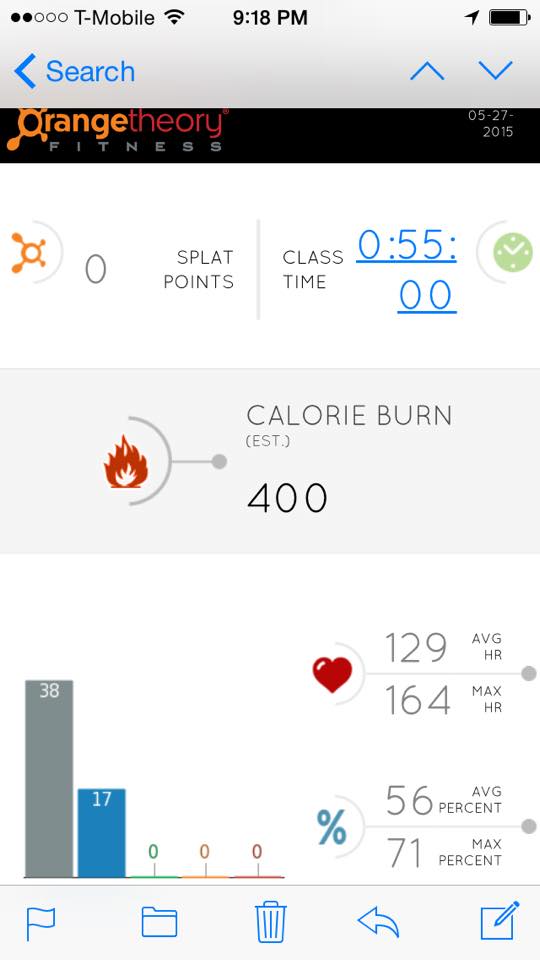 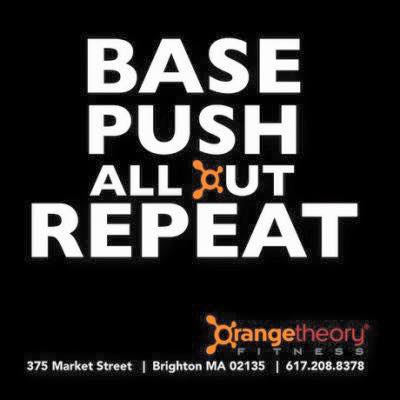 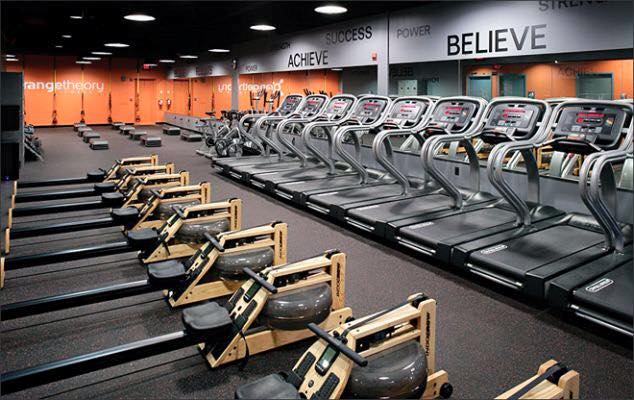 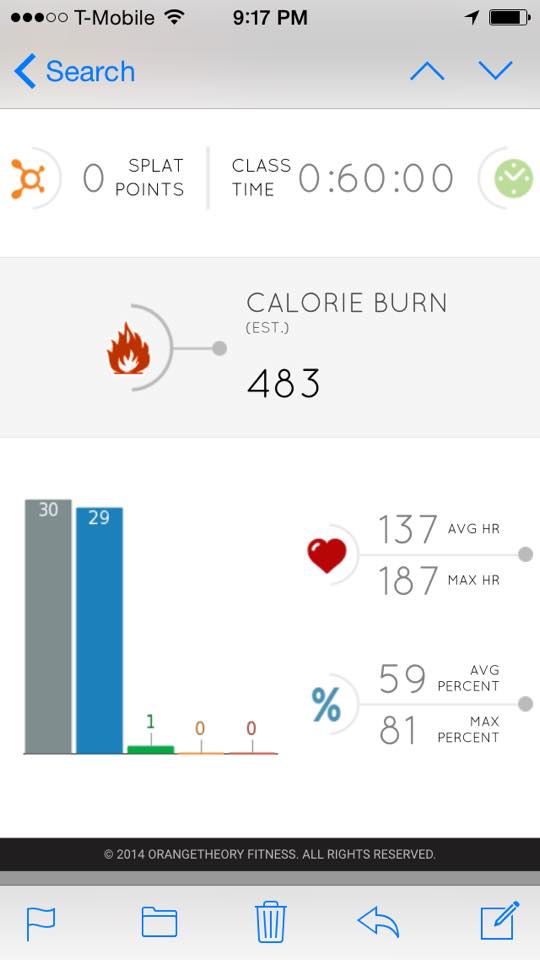