I’ve often wondered how it would feel for someone to love me so much, they peed whenever they saw me.

This was how Bamboo, a fifty-year old Asian elephant, greeted her best friend, retired zookeeper Chuck, whenever he visited. She would squeal with excitement, and when she couldn’t contain herself anymore, Bamboo would relieve herself. It was a sight to see.

When I walked into the elephant barn at Woodland Park Zoo as the newest keeper, I was awestruck  by the relationship the other keepers had with them. Chai, the youngest elephant at thirty years old, always greeted Russ, a veteran keeper of twenty-five years, with a chirp. She would lift her trunk, open her mouth, and solicit a tongue rub from him. But only from Russ. Chai did not enjoy anyone else rubbing her tongue. Believe me, over five years, I tried. It did not go over well. 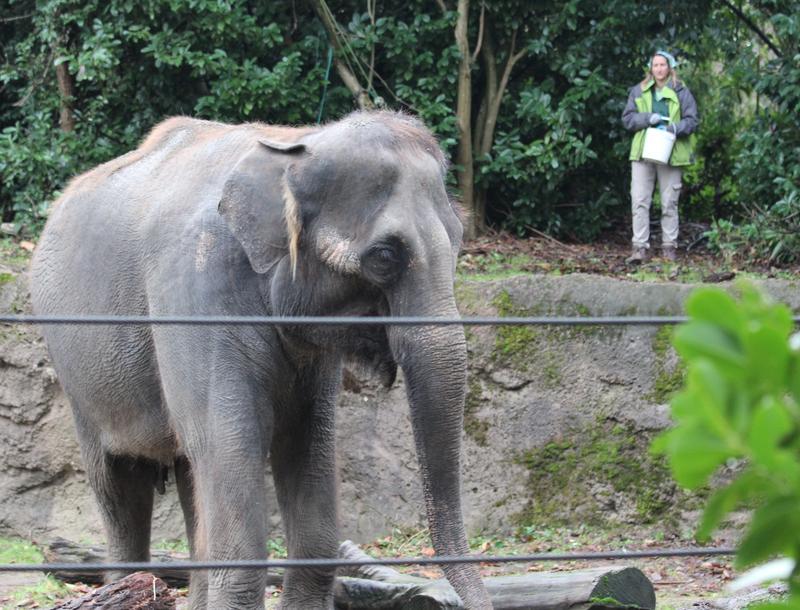 There was Bamboo who reverted to a youngster when Chuck stopped by. I really envied the way he could make her pee like that. Bamboo sometimes plopped down on her rump and sat up like a puppy dog, eagerly hoping her best friend would rub her belly.

And then there was Watoto. Watoto was the dominant elephant of the herd. She was the only African elephant in the herd, and she was larger than life- brash, impulsive, and temperamental. I loved her for it, even if it was a bit unrequited. Watoto hated women.

Watoto was known for charging all the women who had ever worked with her. The only evidence I had for Watoto’s disdain for women was when Dr. Kelly, our main veterinarian, who happened to be a woman, came to the barn. Watoto would tusk the bars and press her forehead against the mesh menacingly.  In comparison, Dr. Derrick, the male veterinarian who filled in on occasion, did not warrant such a greeting.

I’m not ashamed to admit, the idea of an eight thousand-pound wild animal barreling toward me with malice on her brain was just about the most intimidating thing I could imagine. I was wary of Watoto’s moods, but at the same time, it was difficult not to fall in love with all her mannerisms.

When Watoto was annoyed at something, she would flap her giant Africa-shaped ears against her neck, and shake her body, making a “harumph” noise as she went about her day. When she was happy, or content, Watoto made a rumble noise, a soft purr that you could feel all the way down to your bones.  When she was fond of someone, Watoto would produce that low rumble for them, lowering her head to have them scratch her ear. 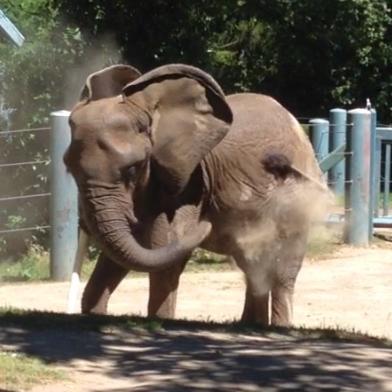 As much as I would have loved for Watoto to accept me, I knew it was very unlikely that I’d ever receive the special gift of a Watoto rumble. But even if she didn’t like me, as part of the team caring for all three elephants, I needed Watoto to at least work with me.  To compensate for me being a girl, I made sure to keep our sessions short and sweet, and lots of fun. I saved her favorite treats for when we worked together. Most importantly, I stayed positive and encouraging throughout each and every session.

When we would trim Watoto’s feet, I ensured that she received multiple breaks throughout the session where she would be allowed to roam around, and come back only if she felt like it.  In the beginning, she didn’t come back that often. I was completely okay with that, even if it frustrated my co-workers. Eventually, when she learned it was her choice to participate, she began to come back for a second trimming, or a third, and sometimes even a fourth session. 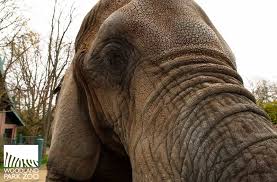 Over time, my consistently positive attitude with Watoto brought about a distinct reputation among my colleagues.  In the three years I had been working with her, Watoto had never charged me. When Watoto acted particularly stubborn, I would be asked to pair up with Russ to work with her. Watoto responded to the two of us well and we had the most success of getting her to cooperate.

One day, though, the best reward for my consistent patience came from Watoto herself. It was a crisp, cool morning.  I was opening the barn to start my shift, and I walked into the animal area to check on all the girls. Chai sauntered over to me, begging for her usual morning treat.  What happened next made my heart skip two beats.

Watoto gently nudged Chai out of the way.  She then lowered her head down to my level where I could have easily reached her ear, and then, she rumbled.  I looked around the barn expecting someone else behind me, but there was no one else there.  Nobody had Watoto’s attention except for me. She was rumbling for me!

From that day on, even when Watoto was obstinate with me, or ignored my requests, I knew my patience and consistency had paid off in the biggest way possible.  Watoto was my girl, always and forever, and with one little rumble, I knew I was hers. 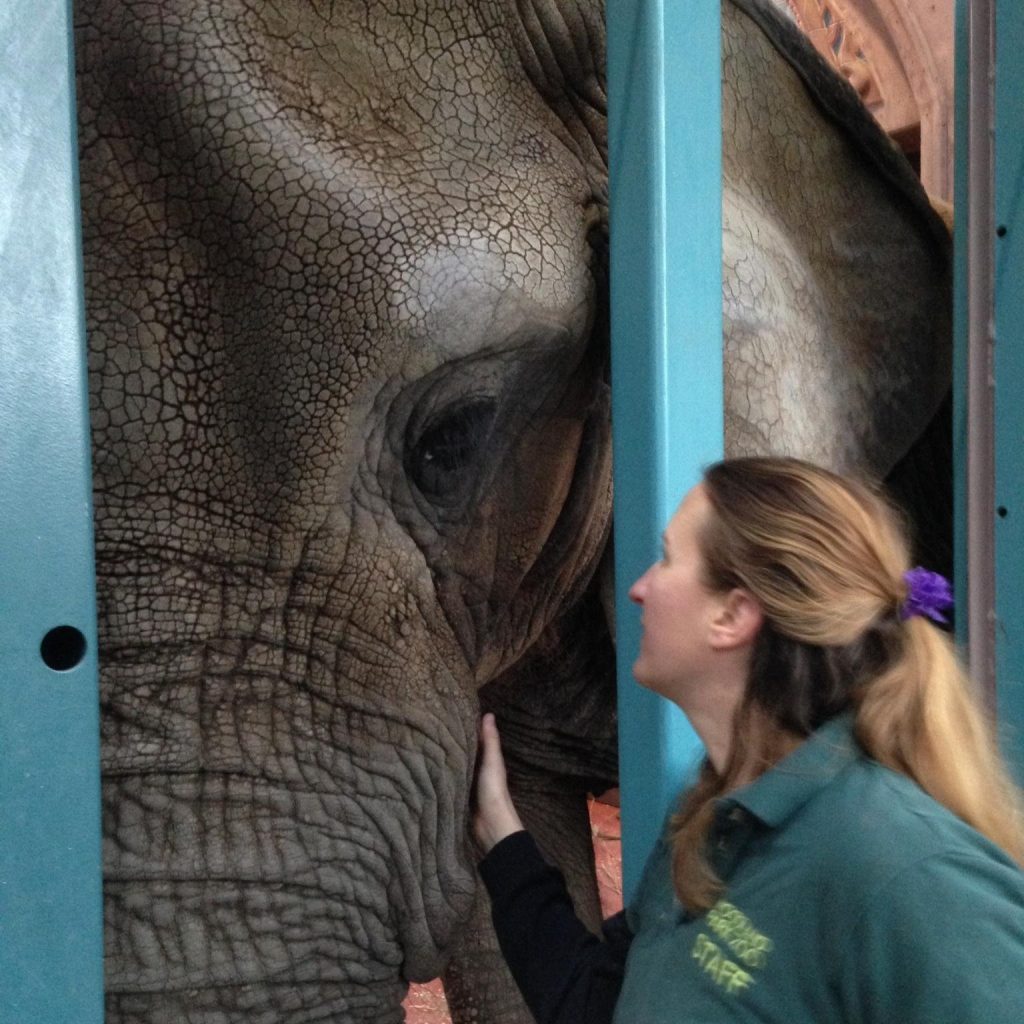 When I started my fitness journey, I knew it wasn’t going to be a quick fix.  I knew this based on past experiences trying to lose weight, and I knew based on my experience as a zookeeper.

I could not expect to make overnight changes to my fitness anymore than I could have expected a Watoto rumble on my first day as an elephant keeper.  If I had walked in on even my 100th day and expected Watoto to rumble for me, I have no doubt that she would have charged me in a heartbeat. I worked with Watoto for over three years before she graced me with that wonderful gift.  Three years! It took a long time to earn Watoto’s respect, trust, and ultimately, her friendship.

As you take your first steps toward a fit and healthy lifestyle, I will repeat these sage words of advice.  Be patient with yourself. If you take away nothing else from this book except this suggestion, I will be the happiest zookeeper/fitness trainer on earth.  Changing your life for the better will take time. We are developing better habits and creating a brand new lifestyle. We did not get where we currently are overnight and we are not going to get where we want to be overnight.  While it is possible for you to make huge strides in a short amount of time, there is also a chance it may take you longer than you anticipated. Remain consistent and patient with your program, and with yourself. The outcome will blow you away.  You, too, will be blessed with a Watoto Rumble. It will be your own special moment that makes all your efforts worthwhile and your success that much sweeter.