Not too long ago, I talked about the health and wellness benefits of Cuddle Therapy. Cuddle Therapy works well with a variety of creatures. Cats and dogs probably come to most people’s mind, but there are other animals who can be great therapists.

I had a pet rat I raised from a pinkie, named Squirrel. Long story short, the vets insisted it was a squirrel, when I knew damn well it was a rat. So, when it became way more apparent it was indeed a rat, I knew I couldn’t release him (invasive species), and named him Squirrel. Squirrel was an awesome pet. He was fun to give enrichment to, and he was REALLY fun to train. Squirrel would sit on my shoulder and sniff my ear. He was a favorite among some of my friends, as we were all crazy Harry Potter fanatics. Squirrel even starred in two Harry Potter fan-films. It was hard not to smile with Squirrel around.

Because of my experience with the little guy, I am adamant about rats being excellent pets. They are small enough to be held in the palm of your hand, but big enough to not be scared out of their minds when you bury your face in them. I still remember the feeling of Squirrel’s whiskers on my face when I’d get close to him. If I had time again to work with animals and had space for a cage, I’m sure we would have another pet rat right now. 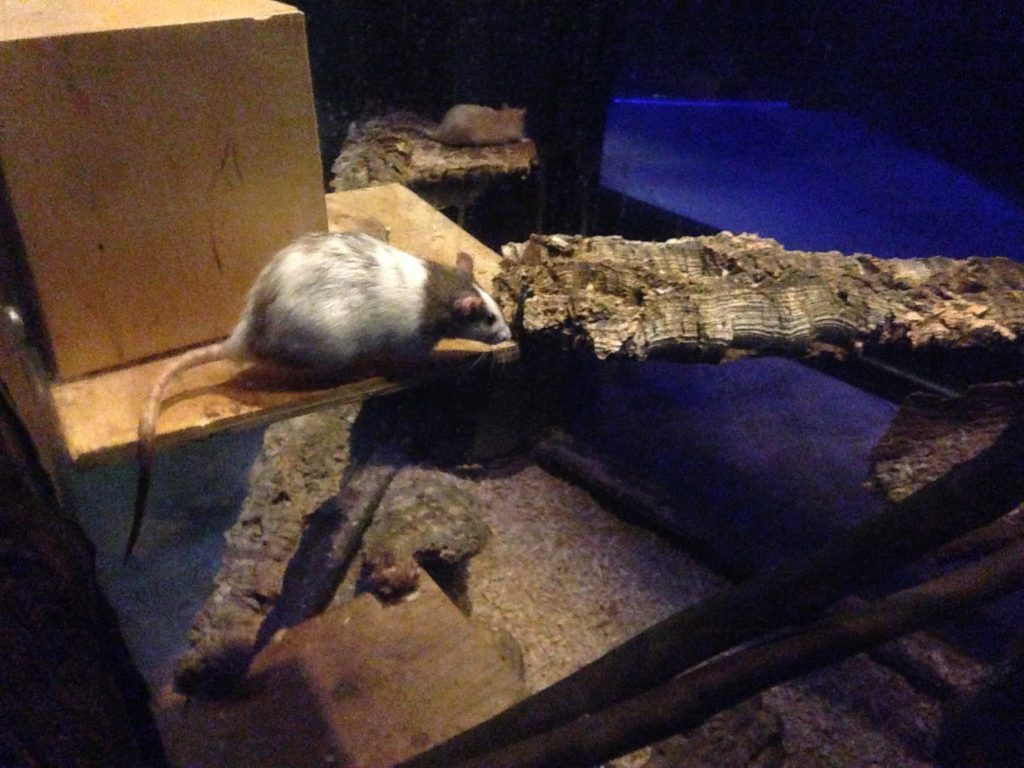 I have heard when raised correctly, rabbits can be great Cuddle Therapists. I did not have this experience with two rabbits we took in from the Humane Society when we lived in Florida. But I attended a Creatures Corner meet-up earlier this year for the 4-H’ers, and I witnessed many kids cuddling and playing with their rabbits. So, obviously, they can be calm and loving pets. Just not the two I had.

Honey and Bear were not very tame. They bit us and each other. When we would take them out of their hutch for socialization, the two would huddle in a corner just out of our reach and not move a muscle. At two o’clock in the morning, though? Yeah, they would be bounding around their hutch making such a racket.

Rabbits are just an adorable pet, though. I mean, those enormous eyes, and the long slender ears. Of course the little boop-tail, and the silky soft fur. I know why they are such an appealing companion animal to many people.

There are hundreds of cute domestic rabbits roaming around the local town of Langley. Apparently, after the Island Fair many years ago, the rabbits either got loose or were set loose. And now they have become something of an icon in the town. No one lets anyone hurt the little guys, even though they may complain viciously about their digging and destructive habits. The rabbits around the fairground, where Chris and I work out in the winter, are so tame, they approach humans and some even allow interactions. After a grueling workout, it always made me a little gleeful to step outside the gym, give a little bunny a boop before heading home.

But small furry pets aren’t the only option for Cuddle Therapy. While I’ve never had a horse of my own (THANKS, Mom!), when I was growing up I lived right next to a huge field where people boarded their horses. When I was down in the dumps, I would take a walk to the field and coax the horses over with some carrots and apples. The horses were usually cooperative in letting me get some pats in exchange for some treats. The soft muzzle is one of my favorite things.

Earlier this year I was given an assignment for Whidbey Life magazine to interview some 4-H kids around the island. I had the opportunity to talk to an endearing young lady (who I believe with all my heart she is GOING places) who works with a quarter horse named Zoom. She showed me a couple of his routine behaviors, and the look on this girl’s face when she works with Zoom is utterly priceless! It’s the epitome of Cuddle Therapy, even though it doesn’t seem horses are the cuddling type.

Also, earlier this year, I went over to my friend’s house where her goats had just had babies. The family brought in one of the youngsters and placed the little guy in my lap. My heart melted. I needed to get rid of the goat quickly before I decided to kidnap him and bring him home to live with the chickens at our place. So, I placed the little guy in Chris’ lap, and like a sleepy kitty, the kid just went to sleep in Chris’ arms. I’m still a little surprised we don’t currently have a pet goat. Because I honestly think my version of heaven will be me in a huge pasture field, surrounded by baby goats licking my face. 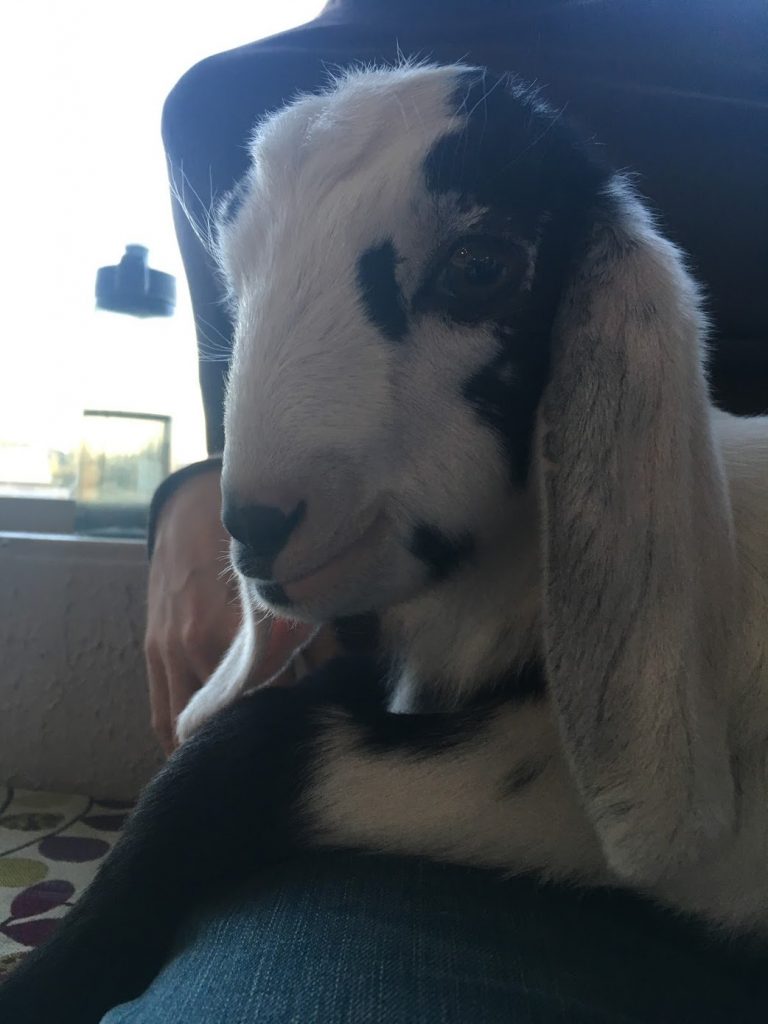 Some people have found their chickens, ducks, or geese enjoy spending time with their human care-givers. My landlord used to keep geese, and she would snuggle with them and kiss them as they wandered around the yard. A few of her chickens used to let her do the same. In fact, one of them, Honey, also eventually accepted me enough to allow me to pick her up and give her kisses. Personally, having a good relationship with a pet which also happens to give me free breakfast or healthy snack is kind of cool. Plus, they’re basically velociraptors. And who didn’t love Chris Pratt developing a trusting relationship with his herd of dinosaurs in Jurassic World?

Don’t get me wrong, here. I love the shit out of my cats. They are my life and they make me want to spoil them rotten. But if they aren’t around, it’s good to know Cuddle Therapy is around nearly any corner if I need it. Do you have a non-cat/dog Cuddle Therapist? Who are they and give me your story.