While I tend to focus a great deal on physical fitness in my writings, I realize the importance of relaxation, mental fitness, and enrichment.  So, it was a great day to get all three with a focus on books, nature, and one of my favorite animals on the refuge, great horned owls.

I host a book club at the refuge and for our meeting this month we read an interesting book called “Passionate Slugs and Hollywood Frogs” by Patricia Lichen.

I thoroughly enjoyed reading this book as most of the animals and plants discussed are common sights at the wildlife refuge.  Some can even be seen around the exhibit center.  I received some interesting insight to some animals I never really thought twice about before.  I found it intriguing that our wonderful little Pacific tree frog is a Hollywood star, as movie producers once deemed the little singer “the perfect frog sound” and included our native frog in any movie with a croaker in it, whether that was the Pacific Northwest, Louisiana bayous, or African forests.  I also finally discovered the secret to why I am everyone else’s best mosquito repellent.  Apparently, mosquito females are attracted to heat, and zone in on anything that gives off a lot of heat.  Well, as anyone who has met me knows, I radiate heat, so it’s little wonder now that mosquitoes think I’m the best thing since sliced bread.

For our meeting, instead of just sitting in the classroom discussing these great essays about our favorite refuge animals, we as a group decided it was such a lovely day that we should experience the discussion of the book on the refuge trail. 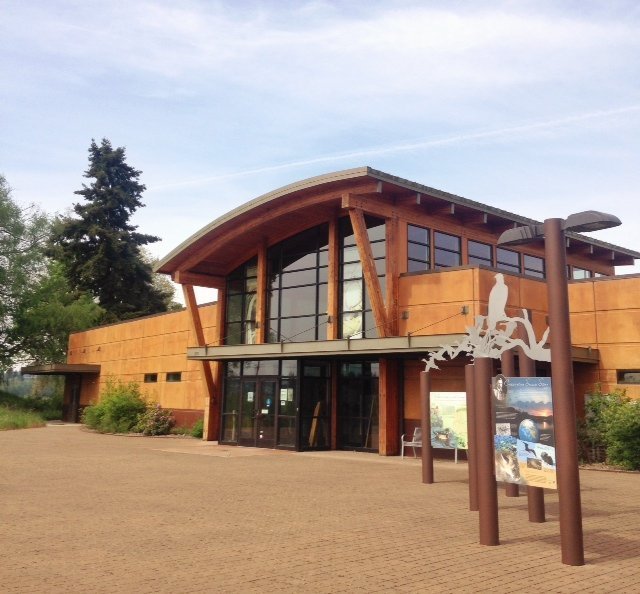 It really was the best decision, as we saw a few rare sights, and unbeknownst to us, they had discovered that the new eagle’s nest was too close to the trail and would have to close it due to federal protections for eagles.

We started off checking off some birds on the list from the book- robin, crow, red-winged blackbird, chickadee, and even a killdeer.  Then we saw the beautiful garter snake sunning himself on the side of the trail. 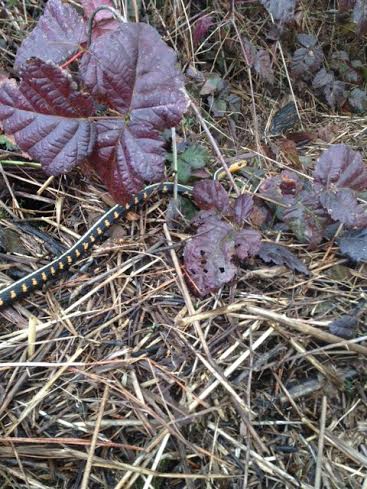 But we were making something of a beeline to the Riparian forest.  Rumor had it there was a Great Horned Owl resting in a cedar tree near the creek.  I have yet to have seen an owl on the refuge, and Great Horned owls are one of my favorite species (Honestly, I think it’s their genus name “Bubo”….I really want to discover a related species and name it Bubo baggins).  As we approached the site the owl had been seen, we became very quiet and observant.  Finally we found the big guy (or girl, I’m not quite sure) in the tree.

Every so often he/she would give us some small indication that it was very much aware of our presence and would we please keep it down (even though we were whispering).  I’m pretty sure sometimes our breathing is considered noise pollution to the animals, though.

It was a special occasion for me.  Later, the weather was still fantastic, so Chris and I hit the park for our workout with a BINGO I had created for Valentine’s Day but didn’t get around to doing. 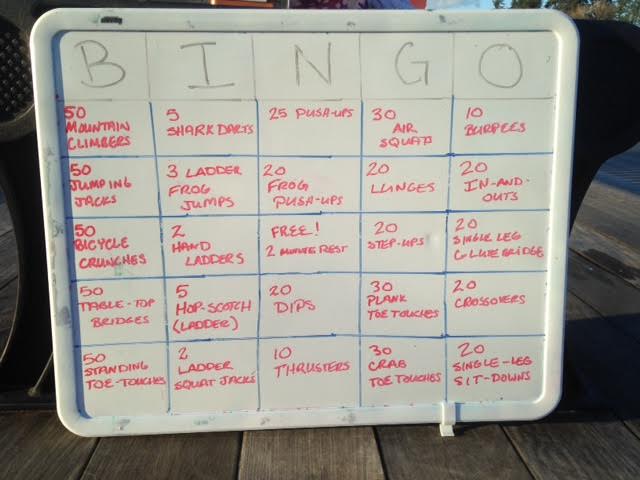 Books and nature!  A great combination to appreciate the earth and stay mentally fit at the same time!