I’m starting an experiment today that goes against what I preach for Zookeeper Fitness.  I just finished a book called “Carrots and Sticks” by Ian Ayres and in solidarity of trying new things, I have decided to enter into a Commitment Contract on their website, stickk.com to ensure that I finish my 75 entries of 100 Ways of EarthFit. 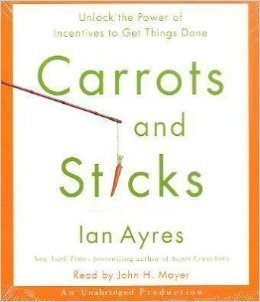 Okay, so I’ll back it up a second.  What is “Carrots and Sticks”?  It’s a New York Times bestseller about “unlocking the power of incentives to get things done”.  Only, most of these incentives are based on negative reinforcement (in fact, I can’t find a single example that is based on positive reinforcement) and punishment.  And this is just incredibly frustrating to me.  Our whole society is so negatively influenced and motivated, that even a powerful incentive to reach and achieve your goals that has over 300,000 “commitment contracts” in play, is based on penalties and punishment, or avoiding them (negative reinforcement).  And if you meet your goal?  If you exceed your goal?  What happens then?  Absolutely nothing.  Except that you don’t lose your money.

Okay, here’s the deal with Stickk.com- You make a commitment contract, say to quit smoking, lose weight, or exercise more, or to drink less soda, or drink more water.  Whatever your goal, you enter a contract to reach your goal.  Then you can invite someone to be your “referee”.  This is a person that will be an unbiased confirmation that you are indeed meeting your goal.  And now we come to the part I really disagree with- you put a certain amount of money down.  It can be anything, but they encourage an extraordinary amount to encourage you to meet your goal.  Because if you DON’T meet your goal, that money will go to a charity.  Or worse, they encourage you to donate the money to an “anti-charity”, a charity that supports something you are completely against.  So, if you were for gun control, per se, the anti-charity could be the NRA.  Or if you are a Democrat, the money would go to some sort of Republican charity (I’m pretty sure, though, that a “Republican Charity” is an oxymoron….).  You are required to check in and I think your referee is given an opportunity to deny or confirm your check-in.  This is supposed to keep you honest.  If you don’t meet your goal, the money you put down goes to a charity or anti-charity.

Does anyone else see my issue?  Because it gets worse, in my opinion.  You don’t get to choose the charity you want to donate to.  And to quote the website, “If you choose “charity” as your recipient of stakes, stickK won’t let you know which one received your money. The reason: if you knew, you might feel a little better about losing your money, and that’s the last thing we’d ever want.”  Seriously?  You are going to punish us even more by possibly donating to a charity that we don’t care about because we might feel a little better about losing our money?  I mean, forget the fact that we won’t feel good because we didn’t meet our goal, or that we lost our money, but we won’t let you feel even a teensy bit better about which charity is receiving your donation.

Ayres, the author of “Carrots and Sticks” and co-founder of Stickk.com, mentions in his book that there is very low return for maintenance contracts after people meet their goal.  And that some people (I don’t recall if or what the percentage is) go back to their original weight after losing their initial goal amount.  This is not surprising to me in the least.  Negative reinforcement and punishment does not foster an encouraging and inspirational momentum.  Subjects of these consequences in operant conditioning rarely do more than the basic requirement to avoid the punishment.  Negative reinforcement basically trains “bare minimum” in people.  However, when utilizing a positive reinforcement approach, motivation and inspiration are abundant.  It’s much easier to want to push yourself after meeting a goal and receiving a reward than it is to push yourself further and risk another punishment.

Last year, in February, I embarked on a month long experiment to see if I could come to enjoy yoga.  I enrolled in several trial memberships, and did yoga every day for the month of February.  I had really hoped after a month of yoga, I would come to appreciate it in a new light, but, alas, at the end of 28 days, I couldn’t wait to retire my yoga mat and return to my CrossFit box.  It wasn’t a failed experiment, though.  I gave yoga a thorough and valiant effort.  I can now say with certainty that yoga is not for me.  I find it fitting then, that one year later, I will attempt another experiment into something I don’t think I will like.  I signed up with Stickk and entered into a commitment contract to continue writing a blog post every day for the next 75 days.  I only put $25 on the line, however, I am not particularly interested in any of the charities they potentially give your money to, so that will hopefully help give me an incentive to work on my goal.  I signed up my husband to be my referee, and I asked a few of my friends to be my supportive cheer-section during this commitment.

I honestly don’t know if I’ll meet my goal.  I’ve already missed a couple of days where I was out of town, away from my computer, or got home so late and exhausted that I just couldn’t write my blog post.  So, it’s possible I could fail in reaching my goal.  But I am really committed to not failing.  I want to prove that I CAN reach a goal, even when the odds are stacked against me.  That’s when I usually get work done- when I’m pressured or when someone tells me I can’t do something.  So, this is a true test.

I’m glad that “Carrots and Sticks” has been helpful in many people reaching their goals.  I don’t doubt it is a great program.  I just want to believe that focusing on the positive is better.  We shall definitely see.