Within 24 hours, I have visited the Beer Bar in Bayview Corner called the Taproom twice already and have had a wonderful experience both times.  However, both times had nothing to do with the food or drinks consumed.  It was the atmosphere and feelings afterward that made the Taproom so memorable. 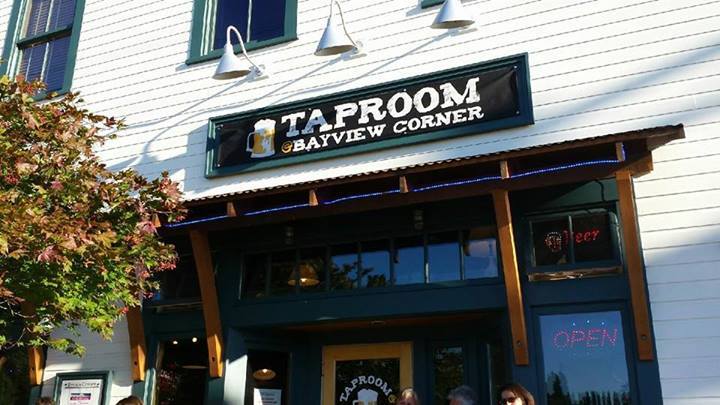 On our first night, my husband and I ventured out for our first night out on Whidbey Island together since moving to here.  The Taproom was hosting The Island Shakespeare Festival’s staged reading of “Henry V” in honor of the Bard’s birthday/deathday anniversary (452nd and 400th respectively) in an event they called “Bard and Brews”.  What excited us, too, besides just getting out of the apartment for a couple of hours to relax and not work out for the first time in forever was the prospect of trying a local venue and tasting some ciders on tap.  Neither of us are beer drinkers, but we both enjoy ciders tremendously.  One of the choices on tap was a cinnamon/caramel cider, which sounded sweet enough and unique enough for us each to try a glass.  The nachos sounded too tasty to pass up, too, and was one of the few choices without meat, so we ordered a plate of those as well.

Soon, the actors gathered around and they announced their agenda, which in addition to providing some entertainment and celebrating the birth/ honoring the death of one of the greatest writers of all time, they were also fundraising for a more permanent backstage area during their Island Shakespeare Festival season.  The Island Shakespeare Festival looks to be an amazing experience in and of itself, so we were happy to support the actors and the cause a little.  And believe me, the actors earned it!  While it was just a reading of the play, it was an amazing reading of the play!  Several performers really stood out, but the crowd-pleaser was definitely the awkward scene between Henry and Catherine, where he attempts to woo the princess who doesn’t understand a word he is saying.

The reading set both of us behind schedule, and we went to bed rather late.  I had a great time at the Taproom, even though we thought the ciders were a little expensive (they were incredibly tasty, to its credit).  But I had never suspected I’d revisit it so soon, as in, the next day.

I attended a meeting concerning the future of Whidbey Island Writers’ Association (WIWA) that was held right across the street from the Taproom.  The meeting provided information that was not exactly optimistic for an aspiring writer such as myself.  One of the defining factors that helped Whidbey Island stand out above the San Juan Islands was specifically the Writers’ Association, so the gloomy outlook of its future was more than disappointing to say the least.  I was not the only one, as there were 24 other members who showed up to voice their concerns, hopes, and (for some) their outrage.  But the writers around Whidbey were not going to go down so peacefully.  There were many among the attendees that hoped to spark a new flame, a phoenix arising out of the ashes, so to speak.  So, after the meeting adjourned, a good number of people trotted across the street and joined together over flights of beer to discuss the resurgence of another Writers Group.

Several things happened at the post-meeting meet-up.  Several amazing things.  One, the whole lot of them looked to me for ideas and hopes for the new organization.  What did I want out of the association?  Well, lucky for them, I LOVE lists!  Some of my ideas I shared with them immediately, some I thought of but didn’t discuss outright, and some I came up with afterwards.  The meeting we actually HAD was one of the latter ideas.  Just gathering together, sharing a brew, or coffee, or water, and talking to like-minded individuals.  We discussed our hopes, our works, our ideas, and our challenges.  It was one of the best pick-me-ups I’ve had in a long time.  Sharing ideas from “Poach Eggs, Not Rhinos” and “EarthFit” was incredible for me, and it helped me take in some considerations for how to discuss the topics to those unfamiliar with the subject.  I would pay $50-$75 a year just to have access to that type of interaction as little as once a month!  The motivation I had after the gathering ended was incredible!  Some of my other hopes and ideas include:

I also thought about how to be self-supporting as an association.  And I remembered at Toastmasters they had a way to “pass the hat” and collect donations in a creative way.  I can’t recall if they called it Rants or Happy Thoughts, but at the very end, people could donate a dollar or whatever they chose to share something special or significant.  And of course, churches pass the basket.  Something similar and creative in a way that only writers can develop could be incorporated at the meet-ups (except the social gatherings).  And by maintaining a volunteer base of mentors and aspiring writers, we can save some money for events, guest speakers, and necessary paid staff.  This means we could potentially keep membership fairly inexpensive, and still generate some revenue to host amazing events and workshops.

There are lots of great things going on the island.  I’m happy to be involved with the community and be able to participate in so many exciting ventures.  Until the next time on Tales of the Taproom.