I have filled my calendar with tons of events this month, and while I have enjoyed all of the talks, movies, and volunteer opportunities for the most part, nothing has compared to the pleasant and wonderful surprise of attending a Toastmasters meeting!  I honestly didn’t think I would enjoy it nearly as much as I did!  In fact, I haven’t been this excited about something in a very, very long time!  This seems to be the time when trying brand new experiences has paid off in a major way! 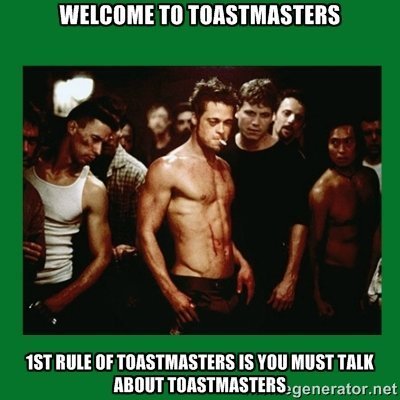 Toastmasters is super organized.  They have something like a ceremony in regards to how their meeting is run.  It’s seems very formal, but it’s not rigid or strict.  For example, during the meeting, there is supposed to be someone at the podium at all times.  The person at the podium who just finished speaking doesn’t step down until the next speaker steps up.  The two shake hands and thank each other, and then the first speaker can sit down.  But it isn’t like anyone is standing there handing out “protocol breaker” tickets or anything.  It’s just something they practice.  I also realized that each time a member stands up to speak, even at the table, they thank the person at the podium by their title before going on.

Now, one could potentially argue that this level of organization and pomp and circumstance would normally drive me crazy, but it didn’t .  It absolutely fascinated me!  The various roles within the meeting also seems to be something I would find off-putting.  There is the time-keeper, whose responsibility is to help speakers keep track of time and let them know how far over their specified time limit they went.  And the “Ah” Counter, who counts all the words that are commonly used as crutches (um, uh, so, but, well, kind of, sort of, and my personal favorite- actually).  One could assume that I find these roles focusing on the negative.  But again, you’d be wrong.  It isn’t focusing on the negative, actually, it’s simply stating these factors as neutral information for you to use.  They (actually) focus on the positive, when they report their trackings at the end of the meeting.  The “Ah” Counter told each speaker in a very casual way how many times one of the “crutch” words were used, but then congratulated and praised those who didn’t have any.  The time-keeper also focused only on facts and presented his trackings as neutral.  If the speaker went over, they went over.  I really appreciated this practice.

There were two aspects I REALLY enjoyed.  The first was the Grammarian, who came up with the Word of the Day.  The Word of the Day is something like a goal word.  Each speaker is encouraged to use the Word of the Day in their speech.  It can be anything the Grammarian wants it to be.  The word for this meeting was “Inspire”.  And like the time-keeper and “Ah” Counter, the Grammarian later reports how many people used the Word of the Day.  The practice reminded me of some of the word games we’d play when I was at SeaWorld.  When we would do public presentations, the keepers often came up with “The Word” that we would try hard to incorporate into our talk.  My favorite was when I was doing a Beluga Interaction Program, the word I was given was “cauliflower”, and I incorporated it three times in the program!  But I think Toastmasters has the better idea of how the “game” works.

The other fun game that was incorporated at Toastmasters was the Table Topics.  One member gets to choose topics and other members, not knowing what those topics are, get up to speak.  The Table Topic leader gives the speaker their topic and the speaker comes up with a 2 minute speech off the top of their head.  This is EXCELLENT practice for interviews, Q and A sessions, or carrying on any conversation where you want to practice speaking fluently and professionally. 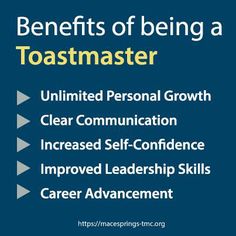 I know from experience how nerve-wrecking speaking in front of others can be.  I know nearly every other word I say when I’m nervous is “actually”, “again”, “and so”, etc.  But the main speaker I heard at the meeting seemed to be neither nervous nor anxious, despite speaking on a topic very personal and revealing.  He was poised, calm, collected, and well, to use the word of the day, inspiring!  Even his gesticulating was perfect!  It was at that moment I knew that Toastmasters was the group for me.  I wanted to BE that speaker, after hearing him talk to the group.  I started seeing all sorts of possibilities unfolding before me: gaining confidence, practice giving presentations in front of a crowd, professional development, learning to convey my ideas more coherently, planning out my presentations, interviews, networking, and learning to deal with critiques and constructive criticism, and how to GIVE it as well.

I was anxious for the meeting to be over for one reason and one reason only.  The sooner the meeting ended, the sooner I could sign up and fill out an application form!  Of all the things I’ve experienced so far since moving to Whidbey Island, who would have thought that the place I’d get so stoked about would be for public speaking?  I think I will forever remember April 18 as the one time when trying something new paid off!