I’m trying an experiment for the next few weeks that is going to end up being a little time consuming, but probably well worth the effort.  While I pride myself on being a techno-phobe, I do recognize the value of several smart phone apps that help people track, log, and plan their workouts, meals, diet, and even grocery shopping.

In 2014, I was using an app to track my food called LoseIt.  By the time I joined the weight loss challenge, I was so ingrained with using LoseIt, that I out-right refused to use the more popular MyFitnessPal.  I didn’t see that there was any difference, and considering that I lost over 40 lbs during the weight-loss challenge alone (50 lbs total over 6 months), I felt that proved my point.

When the gym closed, and I wanted to stay in contact with my gym buddies as much as possible, I switched over to MyFitnessPal because it had social connections where friends could like and comment on activity.  LoseIt has that capability also, but considering that none of my friends used LoseIt, I thought one simple way to stay in touch was through MyFitnessPal, where my gym buddies would help motivate me to keep track.  It took some time to get used to the functions and logging methods of MyFitnessPal, but by the end of the summer, I was pretty much using the app fluently.

I had noticed some immediate differences between MyFitnessPal and LoseIt.  It seemed they calculated the calorie recommendations differently, and one was more than the other.  The calories burned in exercise was also different.  But it seemed miniscule, so I let it go.

Now, two years later, I’ve found myself almost at wit’s end because my weight seems to have gotten out of control, and I’m still logging on MyFitnessPal daily, but not meeting my caloric goal, unless I starve myself, which I don’t want to do.  I feel there HAS to be a way to log my food accurately and see positive changes. So, I decided to revive my LoseIt app and compare my intake and output from the two and really pay attention to the differences.  Only, after almost two years of not using LoseIt, I’ve lost a lot of data and I’m having to restock it’s memory of foods I eat.  Well, that and my eating habits have changed quite a bit, the app has changed, and it’s like working with a brand new tracking app.

I’m using both apps currently to see which one seems to be more accurate.  We have made a realization also, though, and that is it is much more difficult to accurately log your calories when you eat more organically.  It’s healthier, but harder to track.  Because when you eat processed or packaged food, you can just scan the barcode and the nutrition information automatically comes up.  If you are eating fresh and organic food, there are going to be variable differences, and you not only have to accurately measure the food, but you have to be precise in identifying it.  I’m sure it might seem insignificant, but there is probably a difference in fat and calories between coho salmon, king salmon, chinook, or sockeye.  But the apps only identify one, maybe two types.  There might also be a difference between pasture raised meat and factory farm meat.  In fact, I’m sure there is a difference, but it doesn’t show on the tracking apps.  Not to mention which cut you get of meat. 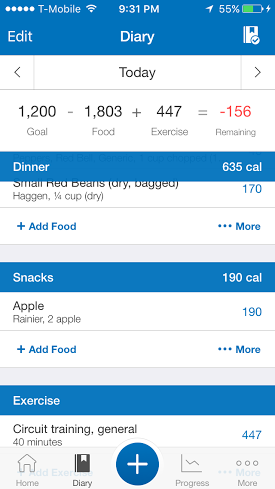 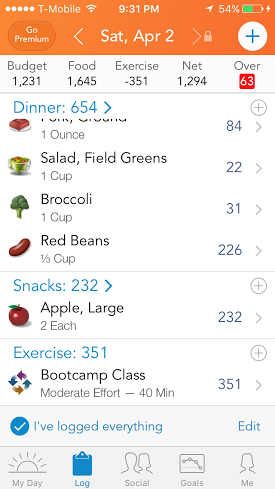 So, it’s harder, but I’m going to try it out.  For at least a couple weeks and see if I can see a difference in my behavior.  Today, I already went over my calories.  Disappointing as I thought I had focused a lot of energy regarding what food I put in my body throughout the day, planned a smaller meal for dinner than I’ve usually cooked, and completed a hard workout that included a total of 99 burpees! 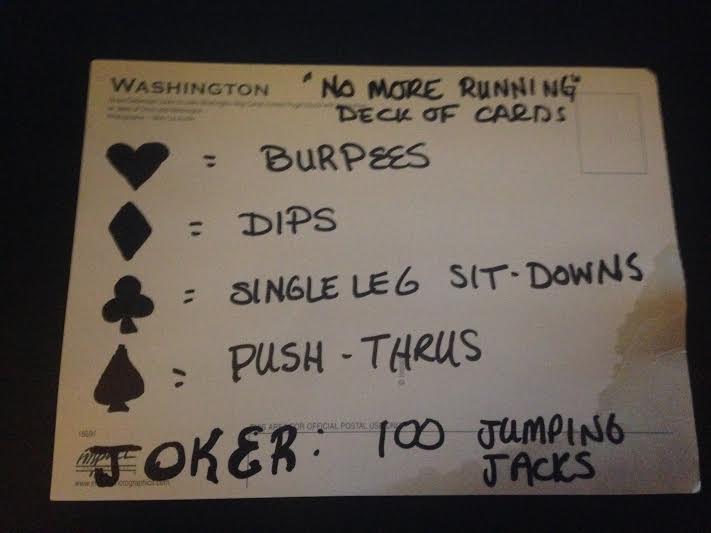 But I’m going to stay the course.  I know giving up right at the beginning doesn’t help anything.

My ultimate plan is to lose 5 pounds a month until September, which will put me back at my goal weight.  In that time, I also want to improve some fitness goals that I’ve put on hold for the past year because availability was limited.  I want to be able to do an unassisted pull-up, 10 regular push-ups in a row with good form, and run 1 mile (my interpretation of running/jogging is acceptable pace) without stopping.  Those are my missions, should I choose to accept it.  I accept.