I should learn my lesson about bad-mouthing how a day goes, because then something is going to happen to shut me right up the next day.  While I may have felt unaccomplished with happenings yesterday, today was pack full of inspiration.  I guess I’ll have to buckle down and pick just one thing, and I think the best topic for the day was Double Bluff Beach workout.  Just call me the Double Bluff Buff Beach Bum.

I had a late start to my day, but once I got going, it felt like I could reach the stars.  I am working on my Zookeeper Fitness program that I will be presenting at the American Association of Zookeepers conference in September.  I have A LOT of information, so I want to be as prepared as possible.  I headed down to the Whidbey Island Writers Association’s co-work, which is a nice quiet place to work on things, but converse with other writers working on things as well.  It’s a great idea, and I hope it continues throughout the summer.

Besides working on my presentation, I also started designing our workout for the day.  It was an absolutely gorgeous day outside, so I thought it would be an appropriate day to try out a beach workout.  Luckily for me, the other writers at the co-work were long-term residents and suggested Double Bluff Beach.  Their expertise sold me and I designed a workout that would test our ability to perform exercises we don’t normally get to try.  The soft sand supposedly lessens the impact on joints, so while I normally can’t or shouldn’t do high impact exercises like box jumps, doing them at the beach might be better.  I also have homemade medicine balls that are great for wall balls, Russian twists, and working on cleans, throwing them to the ground for ball slams isn’t usually recommended.  But once again, the soft sand has more give than a hard floor so slamming the balls possibly will work better. 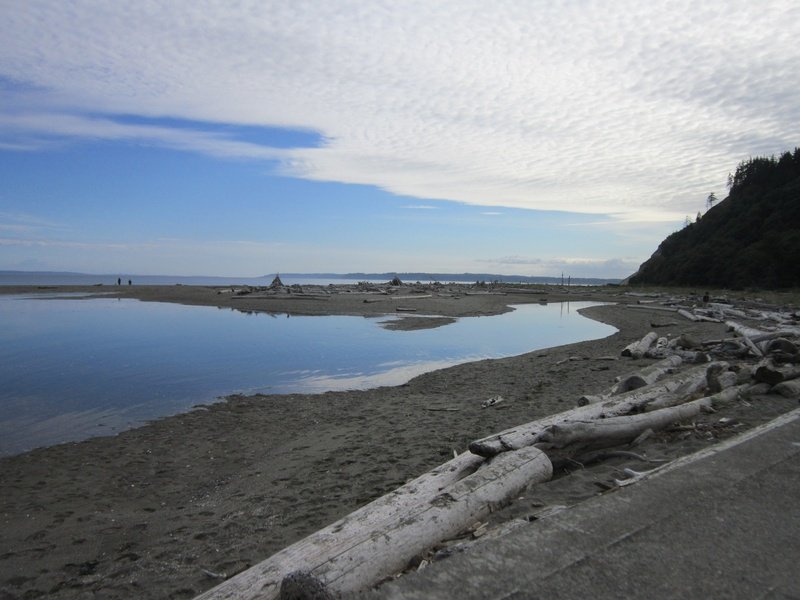 When we got to Double Bluff Beach, I could see why it was suggested by everyone. It is quite popular.  But even with all the cars, it didn’t feel super crowded.  We had a breath-taking view of Mt. Rainier across the water. 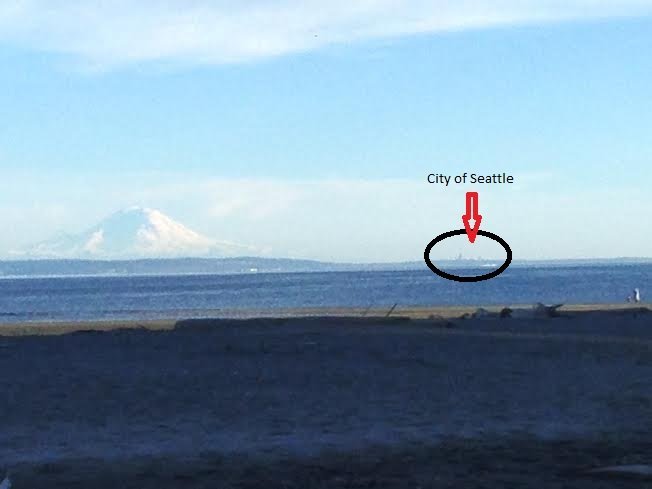 The sound accentuated the mountain and made it look like the behemoth had a line drawn under it, so we referenced the scene as Mountain.  But we weren’t there to look at mountains.  We were there to workout. 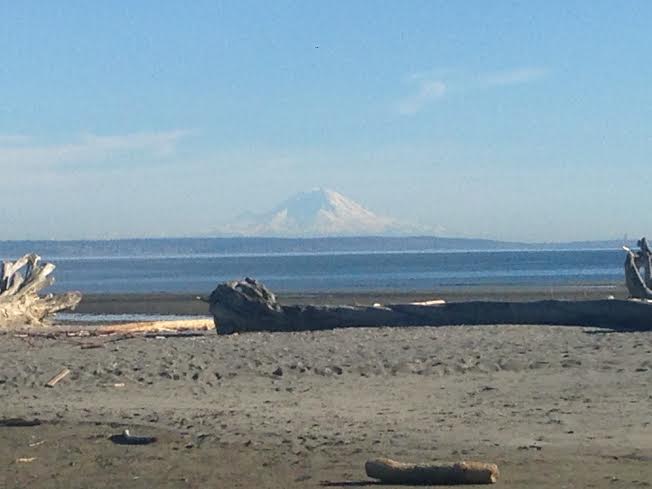 I had us do regular dowel rod stretches as part of our warm-up, and then to get our heart rates up, we each did a lap of band sprints.  This is one of Chris’ least favorite exercises, but I swear I need to incorporate them into our workouts more often.  My heart rate sky-rocketed after only 30 seconds.  Band sprints aren’t sneaky, and while they require a partner and a workout band (used commonly at CrossFit boxes), they are quite simple.  One person gets in the band and keeps it at their ASIS, right below their hips.  The second person just holds on tight and tries to slow or, if you have an evil partner, stop you from progressing.  Add the element of sand, and you are guaranteed to raise your heart rate, and then some. 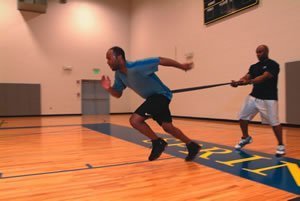 I designed a Tabata WOD for the beach, mainly just to get the feel of doing some exercises on the sand.  We did burpees, lunges, ball slams, and driftwood trunk jumps (aka box jumps, but at the beach).  Interestingly, the sand made the burpees easier, but they took longer.  Ball slams were successful in that we threw the balls pretty hard, and they didn’t break.  And the box jumps were more difficult than I originally thought they’d be because the initial jump to get up onto the box takes more effort to get airborn from the sand.  But at the end, we both felt the workout could have been a little tougher.  I’ll know that tidbit of information for the next time.

We ended the workout with a slow jog along the beach to the end of the park and back to our workout area.  That was without a doubt ten times more exhausting than my typical mile run, and I learned later that it was just a little short of 1 mile.  We could both feel our muscles exhausted after the run, though, so while we may not have run as far, we worked just as hard, if not harder. 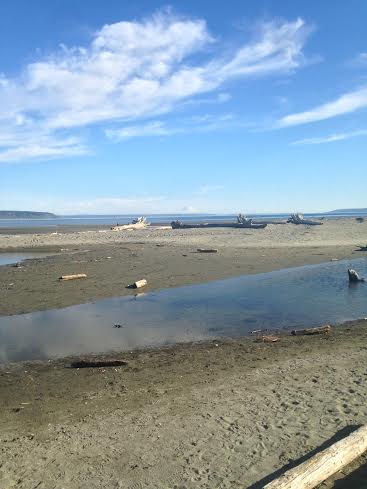 I’ll have to admit that the beach is not my favorite place for a workout.  I’m actually not a huge fan of beaches.  I prefer rocky shores or better yet, avoiding the shore altogether and getting in the water from a boat!  But as far as workouts go, I’ve had far worse.  And the options available are encouraging.  I know what some of our limits will be, and what we can do to push ourselves on the sand, so by summer, we will be the buffest beach bums on Double Bluff!