I have personal feelings about the Oregon Zoo, I’m a little jilted if I can be honest.  But putting personal frustrations aside, I love the zoo.  I think a great amount of conservation and education happens at the zoo, and it’s where I was inspired to create EarthFit, so this being my last week in Oregon, I decided to have one last trip to the Oregon Zoo and check out all the aspects that correlate well with EarthFit.

My first stop was the new 6-acre exhibit for elephants.  As I approached the south viewing area, their young male Samudra and their Borneo elephant Chendra were vocalizing quite a bit.  I looked around at some of the graphics, but most of the graphics outside seemed to be about the exhibit itself, and how the zoo cares for their herd.  This isn’t a horrible concept, it’s something I wish zoos didn’t feel they HAVE to constantly promote and flash in people’s faces.  Unfortunately, it’s somewhat necessary, as many folks listen to only one side of arguments and if simply told that zoos are bad for elephants, then zoos have to fight tooth and nail to get visitors to just listen to reason in order to cast even a slight shadow of doubt on the animal rights’ propaganda.  But I wasn’t at the zoo to see how they handle their PR.  I was there for EarthFit, and to see their conservation messages.

So, I delved further into the Forest Hall, or as I like to call it, the Elephant Airplane Hangar.   This absolutely enormous building has one of the largest herd rooms I’ve ever seen (with an exception of MAYBE Cologne Zoo, but my memory is already getting a little fuzzy).  To the side of the herd room are individual back rooms, a total of 5 or 6 stalls plus a husbandry stall for doing baths, daily check-ups, and training.  All these stalls are behind the scenes, so visitors can’t see them from the front of house.  But it was here at the Forest Hall that I found my jackpot of conservation. 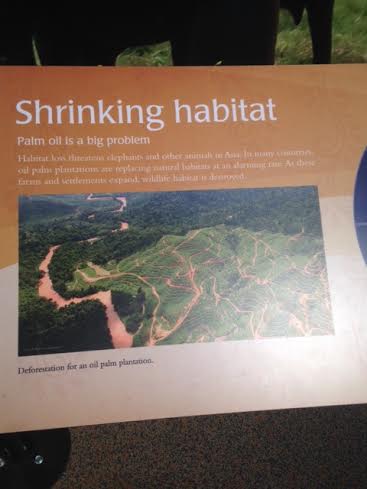 Oregon Zoo is one of the first zoos I’ve seen to really push the palm oil issue and make the crisis something personal for visitors.  Their stance isn’t to boycott palm oil, but to ensure the products you are consuming are sustainable.  They even have a great graphic to show why boycotting isn’t the answer. 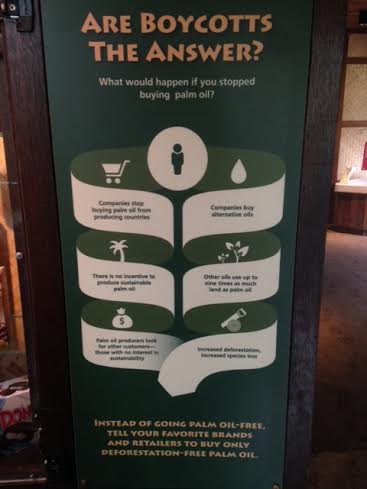 But I love at the Forest Hall, they encourage people to choose food from the “outside aisles” if avoiding palm oil is their choice. 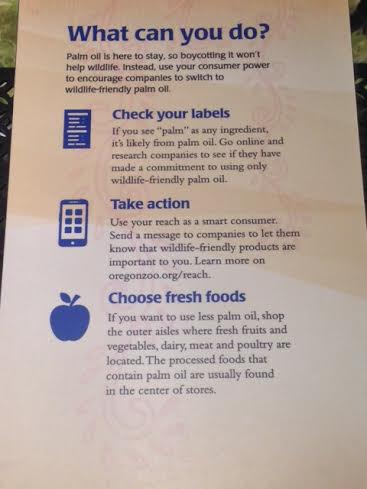 The outside aisles have produce, meat, and most of the non-processed products.  Processed foods usually stay on the inside aisles.  They had a remarkable video about the palm oil crisis, and features their Borneo elephant, Chendra.

Besides palm oil, which is the largest and biggest threat to Asian elephants, they also showcased the ivory trade, and a little on human-elephant conflicts.

There was another great informative video on the tragic impact of the ivory trade, and great display showing how farmers and communities are working with wildlife rather than against it. 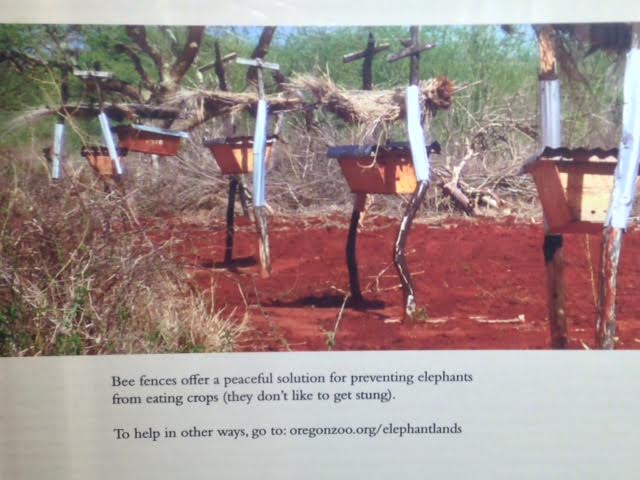 The whole display was really well done, and fit nicely with their elephant exhibit.  I was really glad they brought palm oil into the message, as many people feel the only way to save elephants is to boycott ivory, and many people assume it’s illegal, so it isn’t an issue here in the United States.  Elephants are in deep trouble though, and they need all the support and help we as humans can give them.  And I will add that what zoos contribute is a part of that “all the support we can offer”.  They are a huge part of it, so supporting zoos helps protect endangered species. 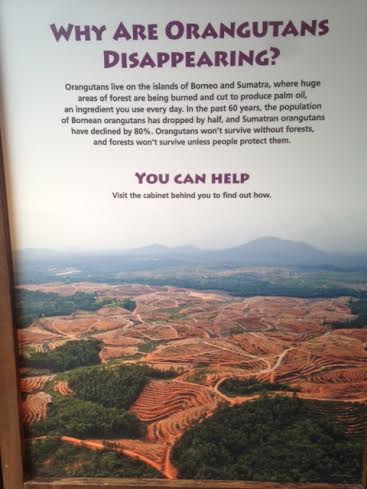 My second mission for EarthFit’s visit to the zoo was to see what kind of conservation was displayed in the Great Northwest area.  This section houses the Family Farm, Condors, Cascade Stream, as well as black bears, eagles, and cougars.  My main interest was the Family Farm and Cascade Stream.  However, I like to point out the California Condors as they are one of the poster children to the importance of zoos.  They are a success story for captive breeding, and if it weren’t for zoos, there would be no more California Condors on this earth.

The Family Farm wasn’t the hustle and bustle I’ve seen it be in past visits.  But they have your typical farm exhibit animals, plus some extras for educational programs.  There are chickens, rabbits, and goats.  They also have a couple of snakes on display, and ducks.  Of course, I love the goats.  Who wouldn’t? 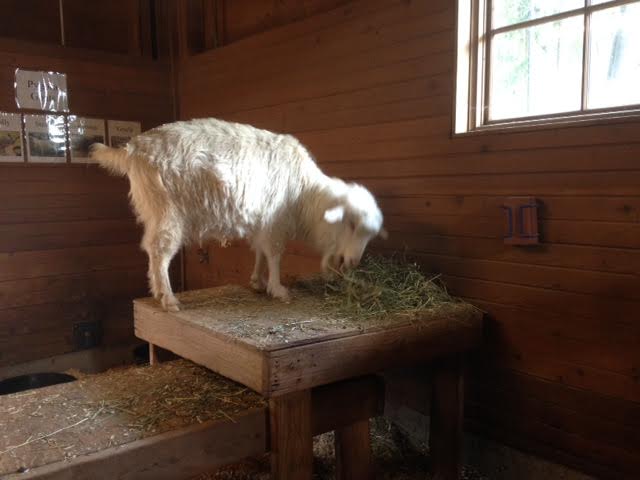 But I was thoroughly impressed to see a large sign promoting farmers markets, and an educational graphic showcasing seasonal produce throughout the year. 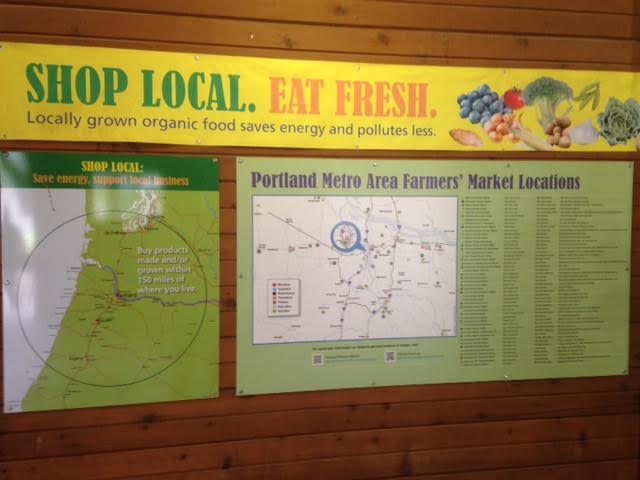 I was thrilled that local and healthy eating was so prominently displayed at the zoo, and at the Family Farm. 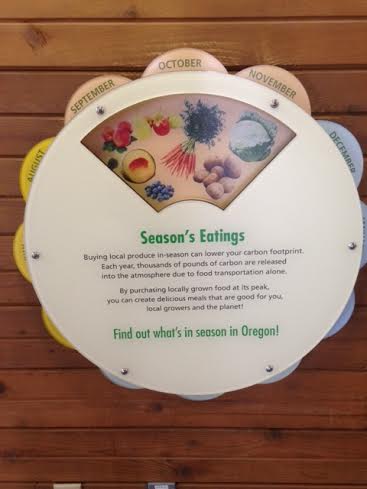 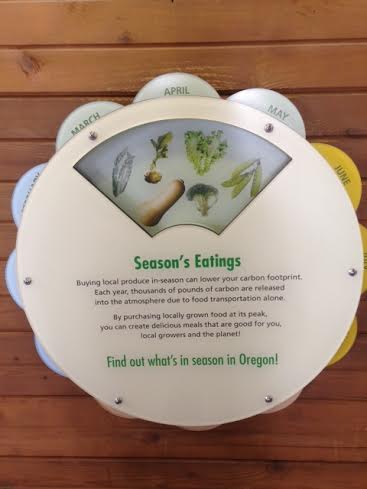 While the idea of eating local may be lost on small children, it’s a great idea to implant the idea in parents’ heads while they enjoy the zoo with their kids.

I walked up to the Cascade Stream exhibit and impressed myself with being able to identify the ducks in their waterfowl exhibit.  They had a few teals, ring-necks, and several glamorous wood ducks.  It was fairly nice to see some of the wildlife refuge’s residents up close and personal, and I instantly thought how great it would be to partner the zoo with the refuge- see them up close at the zoo, learn even more and in their natural habitat at the refuge.  Later on, I noticed there were signs promoting Metro’s Nature Parks already, which was too bad for the refuge, but great for connecting kids and families further to nature.

At first I was disappointed in the lack of conservation messages besides the protection of endangered frogs and turtles in the stream exhibit. 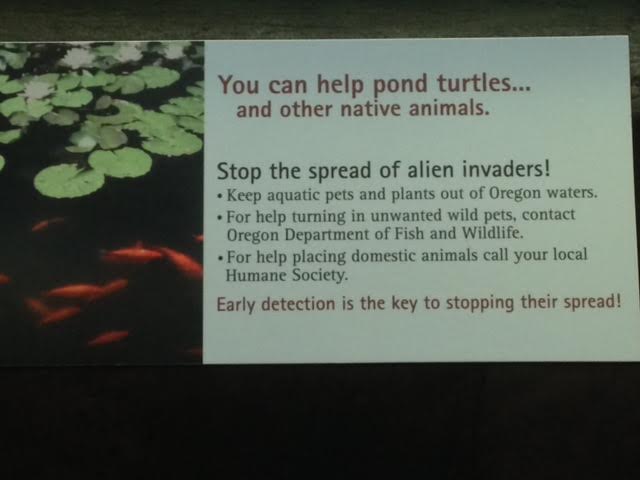 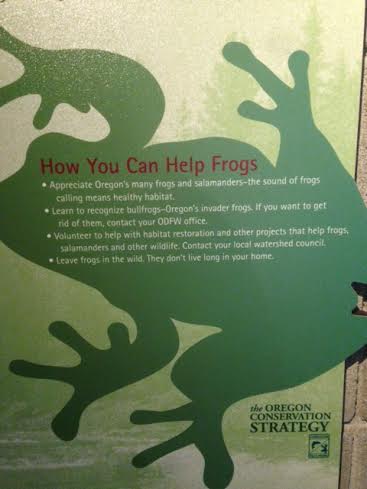 But then I noticed all the signs for salmon, and how they rely on healthy waterways.  While it wasn’t a direct message, to me it was loud and clear that in order to have healthy salmon, healthy frogs, healthy otters, healthy eagles, or healthy US, we needed clean, healthy water.  And that is an important message to take home. 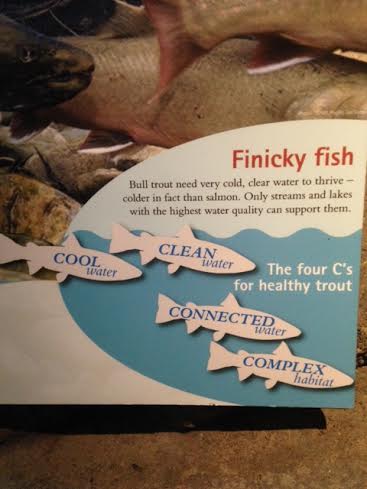 I headed towards the exit and passed by my ultimate favorite graphic at this particular zoo.  It’s great because it really does engage kids (even as I was playing with it, kids were approaching it asking “what’s that?”), and it’s surprisingly entertaining while educating.  Animals can surprise you sometimes, and this graphic I think connects people to animals through the surprise of sounds.

It was a nice visit, and a great way to end my frustrating relationship with the zoo by having a positive and conservation-focused experience.  I hope I am able to reach even a fraction of the public with my ideas and writing as zoos are able to.  We keep going, and keep doing our good deeds.  Slowly, we will all make a difference.